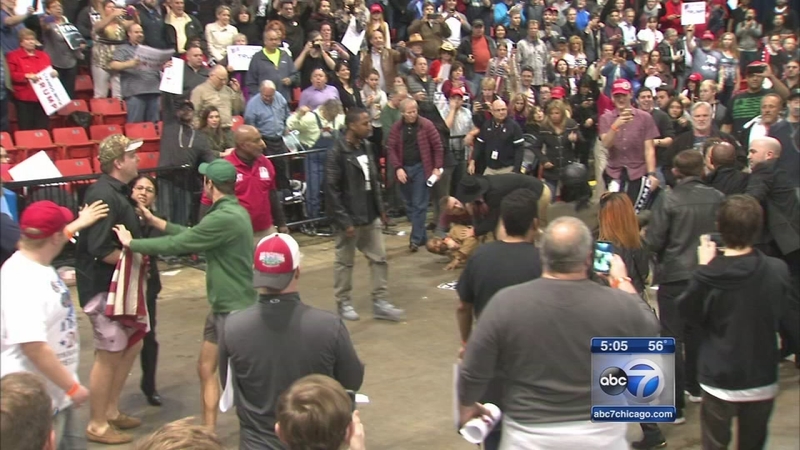 CHiCAGO (WLS) -- University of Illinois-Chicago police officers are angry about what happened at the Donald Trump rally last Friday.

Campus cops say there was a complete disregard for their safety. They blame their chief for putting them in danger.

The meltdown in the Pavilion could have been avoided according to UIC police officers who say there was a complete disregard for their safety at the Trump rally that was cancelled just as it was supposed to begin.

Their complaints in a scathing letter obtained by The I-Team tonight, sSent to the campus police chief and the University of Illinois Board of Trustees.

It got ugly quickly as Trump detractors scrapped with Trump supporters and with campus police after the announcement that the event was being cancelled.

Now a letter from seven of the campus cops, all leaders of the Metropolitan Alliance of Police Local 381 that represents UIC officers. They cite questionable decisions before the rally that showed a complete disregard for their safety and placed them in unnecessary danger.

Numerous scuffles Friday evening occurred because, UIC police say in the letter, they were told not to place their hands on anyone even though they were in charge of crowd control inside the Pavilion.

The letter also states that there was no pre-planning by UIC for Trump rally security, no needed training for the event, no contingency plan if things got out of hand, no riot gear on the scene, no pepper spray permitted as they usually carry and an order banning dark leather gloves because they looked too aggressive.

Campus police say the dangerous restrictions put on them by their Chief Kevin Booker, caused just three arrests to be made last Friday night and then, they say the three were ordered released by Chief Booker, whom according to the letter "stayed far away from the actual event."

The officers who signed the critical letter to university leaders told The I-Team they declined to appear on camera, saying they were following a university prohibition against speaking to news media without permission.

We asked the university police chief to discuss this and he never responded. Neither did UIC'S chancellor or vice chancellor. An email statement from UIC refutes the officers claims,saying they all had appropriate training, authorized use of force, and protective equipment available at all times and that they were never told to maintain hands-off by anyone.

Our officers had all appropriate training, authorized use of force, and protective equipment available to them at all times. The UIC Police were fully prepared to handle security during the Trump event and coordinated extensive meetings in advance with appropriate law enforcement agencies including the Chicago Police, the Illinois State Police and Secret Service as well as campaign and protest organizers.

The posture and tactics employed by UIC Police resulted in no injuries and few arrests inside the Pavilion and an orderly exit of large crowds following the abrupt cancellation of the event. The UIC Police Department was not consulted before the cancellation and UICPD did not recommend that the campaign cancel the event.

-O.C. spray, or pepper spray, is contraindicated in closed, confined areas such as the Pavilion and could have presented a hazardous situation for event attendees.

-Riot gear was available, if needed. The majority of UIC Police were in full uniform, with personal protective gear, with the exception of plain-clothes detectives who provided surveillance and valuable intelligence.

-UIC Police were never told not to wear gloves - just not the dark gloves which look aggressive.

-UIC Police were never told not to place hands on anyone - those instructions were only given to event security and Trump campaign security.