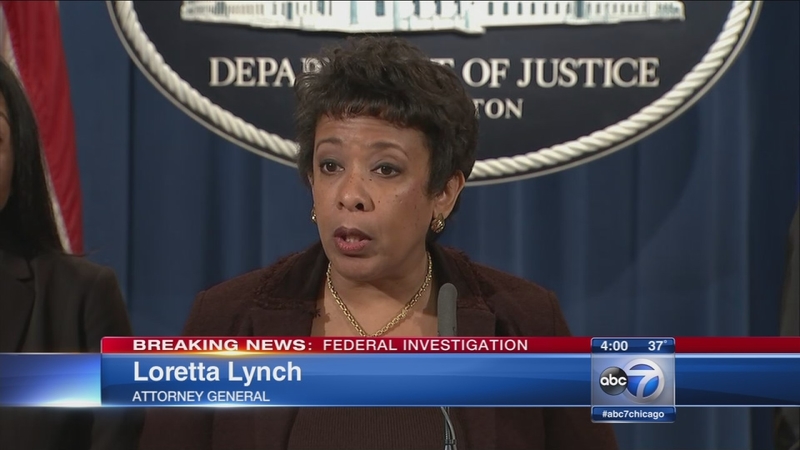 "Our goal in this investigation, as in all of our pattern or practice investigations, is not to focus on individuals, but to improve systems," Attorney General Lynch said.

The USDOJ will investigate whether the CPD "has engaged in a pattern or practice of violations of the Constitution or federal law," Lynch said. "Specifically, we will examine a number of issues related to the Chicago Police Department's use the force, including its use of deadly force, racial, ethnic and other disparities in the use of force, and its accountability mechanisms."

Chicago Mayor Rahm Emanuel said he welcomed the Department of Justice investigation as he introduced Sharon Fairley as the newly appointed chief of the Independent Police Review Authority (IPRA).

Protests have followed daily since the release of the McDonald shooting video, prompting Mayor Rahm Emanuel to fire Garry McCarthy as Chicago police superintendent. The mayor is ignoring calls for his resignation, as is Cook County State's Attorney Anita Alvarez, who took 13 months to bring charges against Van Dyke.

"All three of them - the police, City Hall and the prosecutor's office - are suspect," the Rev. Jesse Jackson said. "We cannot trust them."

When asked if the investigation would also look at Cook County State's Attorney Anita Alvarez, Lynch said, "Our investigation is focused on use of force and accountability in the police department."
EMBED More News Videos

The US Dept. of Justice is looking into the practices of the Chicago Police Department.

Lynch said several officials asked her the Department of Justice to investigate the Chicago Police Department.

"This mistrust from members of the community makes it more difficult to gain help with investigations, to encourage victims and witnesses of crimes to speak up, and to fulfill the most basic responsibilities of public safety officials," she said. "And when suspicion and hostility is allowed to fester, it can erupt into unrest."

Lynch said her investigators will work with the community and police.

When asked if the investigation would also look at Cook County State's Attorney Anita Alvarez, Lynch said, "Our investigation is focused on use of force and accountability in the police department."

The city settled with McDonald's family, an issue Lynch said "seemed to relate to a different issue," of possible cover-up that the practice and pattern inquiry would not address.
EMBED More News Videos

Former prosecutor Ron Safer said the investigation will focus on systematic patterns, not a single case.

However, the Department of Justice investigation is completely separate from a criminal investigation into the McDonald shooting led by U.S. Attorney Northern District of Illinois Zachary Fardon. Fardon was asked about possible obstruction of justice charges against other police officers who were at the McDonald shooting and the police reports that seem to contradict the dash-cam video.

"I'm not going to comment on specifics as to this particular investigation," Fardon said. "We do what we do independently. We do it with vigor."

"It's very different form looking at a single case, like the McDonald case. . . They will look at the practices of the police department. They will look at how they operate in general and how they are holding their officers accountable," Ron Safer, former prosecutor, said. "It's incredibly complicated."

The DOJ investigation into the Chicago Police Department is expected to take some time. Lynch said she would not "cabin" the inquiry with a deadline. Similar investigations have lasted more than a year and have ranged beyond their initial law enforcement targets.
EMBED More News Videos

In the last six years, the DOJ has opened more than 20 investigations of police departments.

"We reserve the right to expand it should more information come to light and require of constitutional issues there, as well," Lynch said.

In the last six years, the DOJ has opened more than 20 investigations of police departments. In March, the department released a scathing report of the Ferguson Police Department that found pervasive civil rights abuses. In May, another investigation of Baltimore police was opened in response to the death of a black man in police custody.

If systemic violations are found, the investigations typically result in court-enforceable agreements between the federal government and the community that serve as blueprints for change and are overseen by an independent monitor. The federal government has the option of suing a police department that is unwilling to make changes.