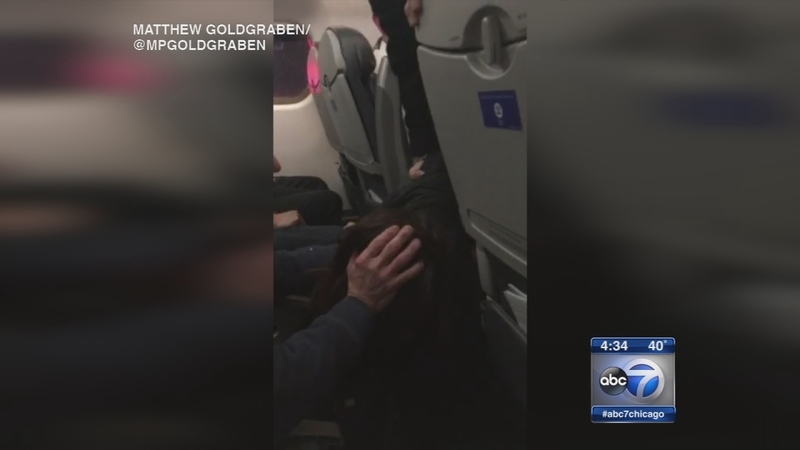 DETROIT (WLS) -- Cell phone video shows passengers holding down a woman accused of scratching and harassing a flight crew member on a New York to Chicago flight that was diverted to Detroit.

Brenna Farquharson, 22, was arrested after Shuttle America Flight 3461, which operates as United Express, landed safely on Thursday night. She was charged with assault.

Bob Fitzsimmons was one of the passengers who helped subdue Farquharson.

"It was fairly obvious that the airlines didn't have a protocol. Once we had the passenger down on the floor I thought an air marshal would be coming, and looked over my shoulder... and no one coming," Fitzsimmons said.

Fitzsimmons said passengers used belts, scarves and even an apron to restrain the woman, who kept getting loose.

"We asked the flight attendant for zip ties or even duct tape would've been effective. And really they didn't have anything," Fitzsimmons said.

He believes the incident should serve as a wakeup call for what airlines should have available onboard during a crisis.

"Perhaps our attention needs to shift from security checkpoints, to onboard crisis management," Aviation Expert Joe Schwieterman said. "The closest thing we've seen to any action is discussion about pilots carrying handguns."

United Airlines did not reply to our request for a statement on restraints.

None of the 69 passengers nor four crew members were injured in the incident and the flight continued on to O'Hare.