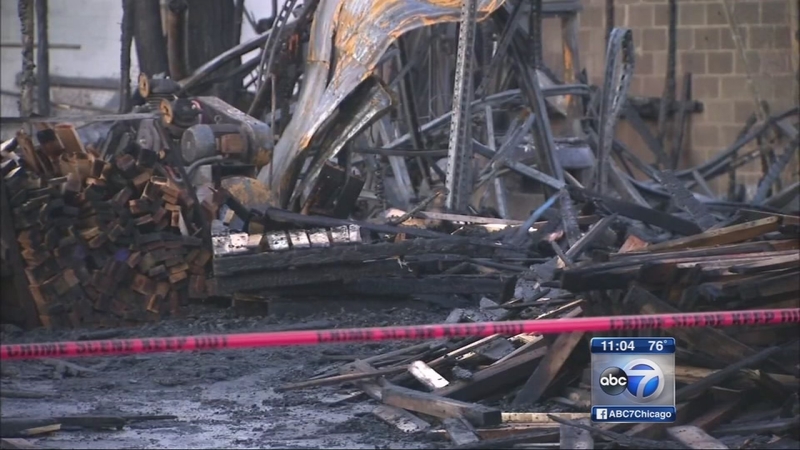 CHICAGO (WLS) -- Investigators from the Chicago Fire Department and the Bureau of Alcohol, Tobacco, Firearms and Explosives are working to determine the cause of an extra-alarm fire that spread from a pallet factory to a nearby home.

A CFD source told ABC7 Eyewitness News arson may be a possibility.

Bolita Pallets, which builds, sells and repairs wooden pallets, has been in business for 18 years. The factory burned to the ground late Monday night.

"Came out here, it was a really big fire. As soon as we got closer to the block, we saw a couple of explosions go off, it was a pretty bad fire," said Narron Bollar, who witnessed the fire.

Firefighters were called to the scene near North Damen and West Grand avenues around 11 p.m., where they encountered huge flames and several explosions Fire officials said the blaze was fueled by wooden pallets and propane tanks.

"When you have pallet companies like this, they have propane tanks on the scene that are usually used for the fork lifts. That's what was exploding at the beginning," said William Vogt, Asst. Deputy Commissioner, Chicago Fire Department.

The flames spread to the attic of a two-story house next door before crews were able to extinguish the fire, around midnight. Felipe Munoz, who has lived in the home for the last 18 years with his family, said he lost everything.

"Everything is damaged. In the basement, the water comes about 2 ft. high. I never see this. I feel so bad, my wife, my daughter. Everybody feeling not good," Munoz said.

He was watching TV when his daughter came home from the Chicago Bears game, saw the flames and rushed her family out the door.

No one was hurt, but the rear section of his property was completely burned out. Munoz said due to the extent of the damage, his family cannot stay there.

Surveillance video from Commercial Pallet, another large pallet company located about 200 yards away, shows a shower of hot embers raining down on wooden boxes. Firefighters noticed it and took quick action.

"I've been in business almost 40 years. I hate to go out of it. I got a lot of good customers and a lot of good employees," said Les Hagan, who owns Commercial Pallet.

Tommy's Grill is located next door to Bolita Pallets. Tom Psaltakis, who owns the restaurant, said his building was hardly damaged. He opened for business Tuesday.

"I'm so happy that nothing damaged in here. Everything is fine except for the cleaning part. Everything else was fine," Psaltakis said.