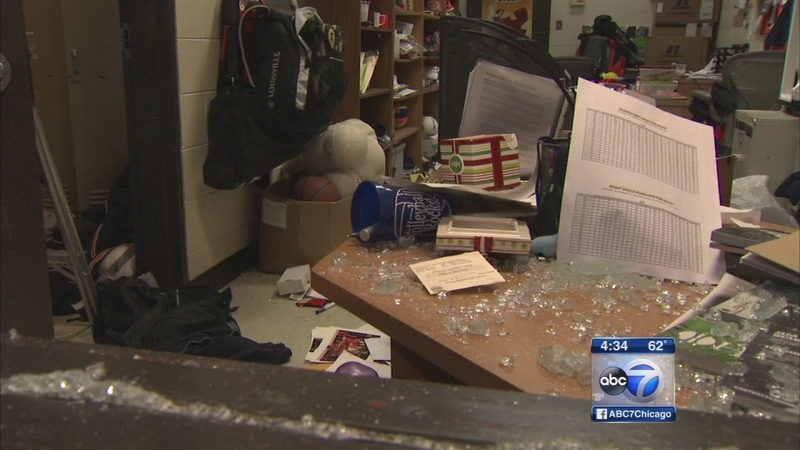 CHICAGO (WLS) -- Vandals trashed some offices at Chicago's Whitney Young High School, and this isn't the first time that thieves have broken into the school.

"This happened in the wee hours of the morning. Offices were broken into, glass was broke in the windows, and we just have a big mess we need to clean up," said Dr. Joyce Kenner, principal.

The break-in was discovered around 5:15 a.m. Tuesday after a school staff member arrived to find that three coaches' offices were not only ransacked, but vandalized - causing tens of thousands of dollars in damage.

Although the gym itself was not targeted, several doors were broken, windows smashed, and other items tossed around. At least one school laptop was stolen.

Chicago police gathering evidence at the scene didn't say how the burglars got into the building but think the thieves may have hidden under bleachers after walking in through an open door.

"It appears like someone or somebody or a group of people are sleeping in this building until it's quiet and then they can do their thing in the wee hours of the morning," Kenner said.

Chicago police may have to rely solely on the evidence gathered at the scene because the Near West Side school building has no security cameras.

School officials at Whitney Young say they've been asking for them for years.

Chicago Public Schools officials could not be reached for comment.

The gym has been cleaned up and back open to students again. School and CPS officials are meeting once again to talk about installing security cameras.