Widow of Dolton firefighter: 'He accomplished so much'

WLS
By Leah Hope
DOLTON, Ill. (WLS) -- The family of a 35-year-old Dolton firefighter who died on Saturday is remembering him as an active and young man who was always the one to help everyone else.

Lawrence Matthews died after he collapsed at the scene of a fire in Harvey. Most didn't know he had a cardiac history.

On Tuesday, his wife Rachel Matthews spoke exclusively to ABC7 and shared some of her memories.

Surrounded by friends and family, she said "Definitely, I feel all the love." But she also acknowledged the shock of losing her husband.

On Saturday, the seemingly healthy, strong and energetic Lawrence Matthews would die of cardiac arrest.

Rachel Matthews knew it could be possibility.

The couple met at the University of Chicago Hospital shortly after he received a heart transplant ten years ago.

She actually scheduled his lab work.

"He grew on me so quickly," Rachel Matthews said.

With a new heart in 2007, Matthews got back to health quickly and would become a firefighter. He would coach and mentor young people. He was even Santa at Christmas time.

And there were many times that he was asked to offer support to other cardiac patients waiting for a transplant.

But his best job was being Dad - to three children and two step children.

"In those ten years he accomplished so much," Rachel Matthews said.

Known as Firefighter 539, Matthews only had one setback last year regarding his heart transplant.

But there were no warning signs before last Saturday.

"I'm glad he was able to put his new heart to good use in the best way ever," Rachel Matthews said. "He died doing what he loved, and that's helping someone else, saving lives."

Lawrence Matthews also dabbled in acting. He was an extra on several shows and had recently taken acting classes.

Some of the firefighters who served with Matthews are returning to duty this week. The fire chief took them out of service for three days to offer support and some time to grieve.

Visitation for 35-year-old Lawrence Matthews will be held 6 p.m. to 9 p.m. Friday at Leak & Sons Funeral Home, 18400 S. Pulaski Rd. in Country Club Hills. A fire department walkthrough will be held at 7 p.m.

On Saturday, viewing will be held 10 a.m. and a service will start at 11 a.m. at Holy Temple Cathedral, 15912 Lincoln Ave. in Harvey. The Dolton Fire Department procession will arrive at 9 a.m.

Afterwards, a procession will go to Washington Memory Garden, 701 Ridge Rd. in Homewood.

A Dolton firefighter died while battling a fire in Harvey.

A house fire near 150th and Rockwell in Harvey. 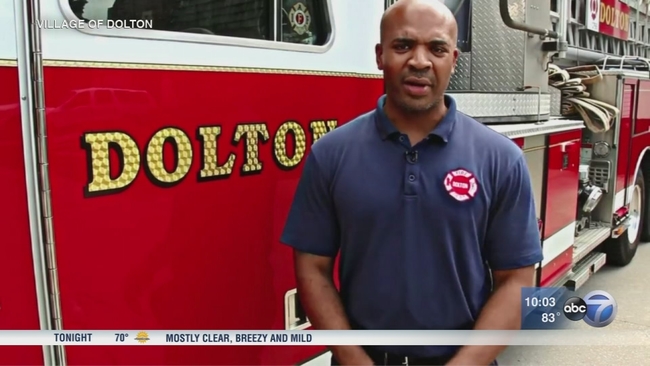