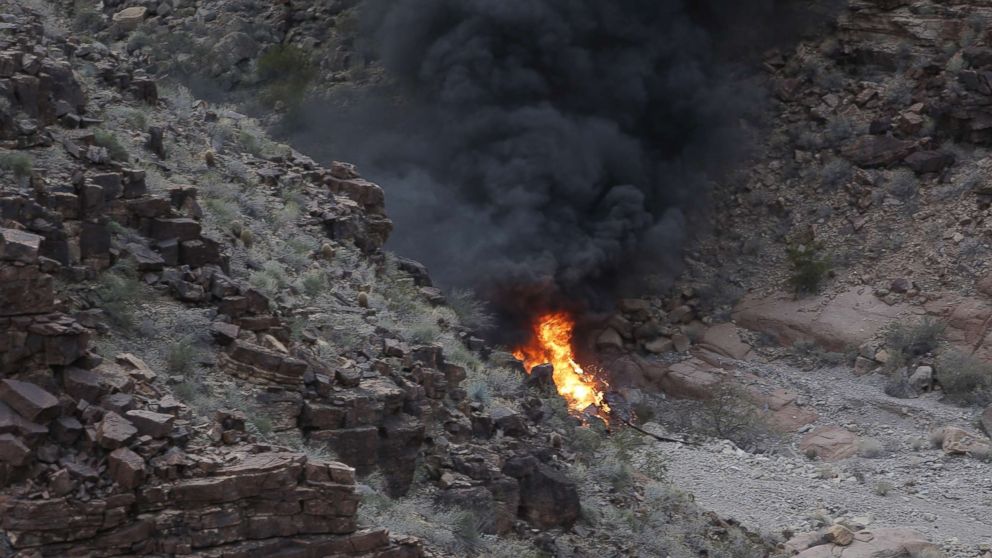 Three people were killed and four critically injured when a helicopter touring through the Grand Canyon National Park crashed and exploded in a fireball, officials told ABC News.

As investigators tried to figure out what caused the crash of the Papillon aerial-touring company helicopter -- which was carrying a pilot and six tourists from the United Kingdom -- a witness described to ABC News watching in disbelief as one of the survivors walked out of the flames.

Witness Lionel Douglass, who was attending a wedding on a bluff about 1,000 yards away from where the helicopter crashed and exploded, said the scene reminded him of the biblical story of when Jesus rescued Shadrack, Meshack and Abednego from a fiery furnace they were cast into by King Nebuchadnezzar.

"I had taken my phone and I was zooming in to see if I could see anybody and a lady walked out of the flames and I just lost it," Douglass told ABC News.

Video taken by witnesses shortly after the crash and posted on Twitter showed the helicopter engulfed in flames and black smoke, surrounded by sage and cactus at the bottom of a steep, rocky canyon.

Hualapai Nation Police Chief Francis Bradley said the crash occurred at 5:20 p.m. local time, with six passengers from the United Kingdom and the pilot on board. He said the helicopter tour originated in Boulder City, Nevada.

Bradley said a storm was rolling into the area around the time of the crash. He said weather conditions were "not normal," but no flight restrictions had been imposed.

He said the crash occurred in an area with extremely rugged terrain and that initial rescue efforts by emergency helicopter were hampered by gusts of up to 50 miles per hour. Bradley said rescuers had to hike into the area and that they didn't get everyone out of the wreckage until about 2 a.m. Sunday.

Douglass told ABC News that he saw the helicopter plummet from the sky after doing two complete circles as if the pilot was searching for a spot to set the aircraft down.

"It happened so fast. When I saw them turning, I wasn't sure what he was doing and by the time I yelled to everybody to turn around and look, it was all out of control," Douglass said. "It fell down between the mountains, the tail broke in half, it hit the bottom and it was the biggest explosion you ever heard and then flames like you never seen before."

He said the initial explosion was followed by five or six others.

He said the woman who staggered out of the flames appeared to be disoriented. Once out of harm's way she collapsed to the ground and began screaming the name Jason.

It is unclear if the pilot is among the injured or deceased.

The four who survived the crash were taken by rescue helicopter to the University Medical Center of Southern Nevada and remained in critical condition Sunday evening, hospital spokeswoman Danita Cohen told ABC News.

According to Papillon's website, it flies roughly 600,000 passengers a year over the Grand Canyon and on other tours.

"It is with extreme sadness we extend our heartfelt sympathy to the families involved in this accident. Our top priority is the care and needs of our passengers and our staff," Brenda Halvorson, chief executive officer of the helicopter touring company's parent company, Papillon Group, said in a statement Sunday afternoon.

Halvorson said the company is cooperating with the National Transportation Safety Board and local authorities investigating the crash.