WLS
By Jessica D'Onofrio and Leah Hope
CHICAGO (WLS) -- A Cook County judge denied bail Monday for a 24-year-old woman who was charged in the murder of the 19-year-old daughter of a Chicago police officer.

The attack was allegedly over a man, and started with taunts on social media.

Chynna Stapleton, who was in custody since Friday night when the incident occurred, faces a first-degree murder charge.
Stapleton is accused of ramming Tatyanna Lewis into a tree with a 2002 Jeep Liberty in the city's Morgan Park neighborhood. Stapleton got into her SUV after a fight between the two women near 114th and May streets on the South Side.

She allegedly then backed up and ran over Lewis' body at least two more times, police said. Stapleton's father said she was trying to get away from an angry mob when she ran Lewis over.

A prosecutor told the judge that Lewis was trying to run from the vehicle when she tripped.

"Just senseless violence in this city. We shouldn't have it, but we do. My thoughts and prayers go out to that officer and his family because no one should have to go through something like that," said Chicago Police Superintendent Eddie Johnson, who identified the victim as a police officer's daughter.

The prosecutor said the two women agreed to meet for a fight and did. As Lewis and her friends were leaving the planned altercation at 114th and May, the prosecutor told the judge in that Stapleton drove the wrong way on a one-way street to hit Lewis.

Lewis was pronounced dead at the scene.
"It's really hard because, you know, in the last couple of weeks we had three police officers shot trying to keep this city safe, so violence happens. It can happen to anybody at any time. It can touch anybody. That's why it's so important for us as a city to come together to tap it down," Johnson said.

Stapleton was allegedly enraged over a new relationship between the father of her baby and Lewis.

Police said Stapleton's Jeep had pieces of wood lodged into the front bumper, which was smashed. In her mugshot, Stapleton has a bandage on her face, but it was unclear if the injuries were related to the incident.

Stapleton has three children. A 13-year-old child who was in her backseat when the incident occurred is not one of them.

An 18-year-old woman was killed when a possible romantic rival rammed her into a tree with her SUV. 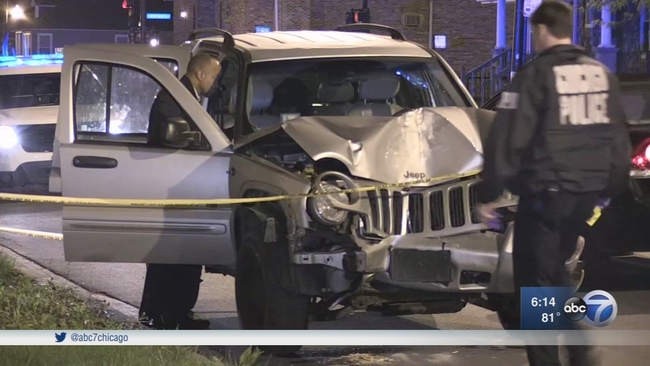