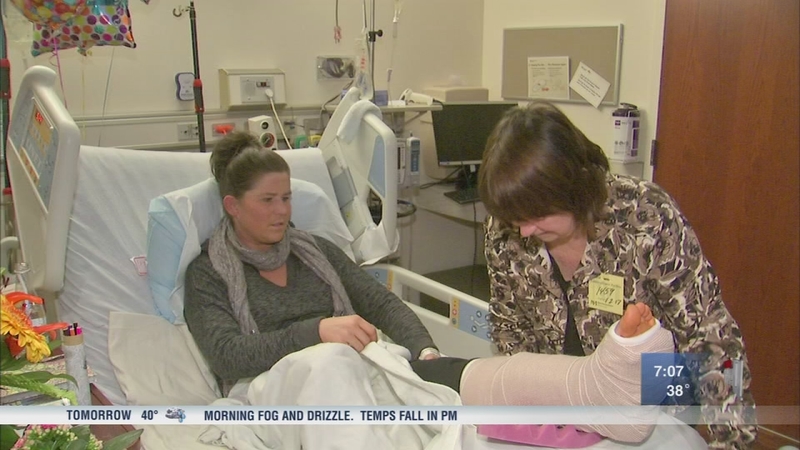 CHICAGO (WLS) -- A woman who was injured in a hit-and-run in Chicago's Gold Coast neighborhood last week said that she is lucky to be alive.

On Monday, the driver was still not in custody after they hit Sara Paulson, a 34-year-old bartender. She was released from the hospital with several pins and a plate in her ankle.

Paulson was crossing the street near North Dearborn Avenue and West Elm Street around 3 a.m. when she was hit by a red Mercedes Benz heading north on Dearborn.

"I just heard a peel out and I looked up and the car was just coming at me," she recalled. "I hit the bumper and then I rolled up on the hood and then I bounced off the windshield and I was airborne and flew down onto the pavement."

She was conscious during the whole incident and recalled strangers coming to her aid.

Despite her pain, Paulson said she is moved by the people who have rallied for her, including the strangers who stayed with her right after the accident - especially because she was afraid of getting hit again by another vehicle.

"I just can't imagine anyone would leave a person laying on the road like that, not knowing if they were dead or alive," said Paulson's mother, Sandy Paulson.

Paulson faces an 8 to 10-week recovery. She does not have insurance and co-workers started a GoFundMe page to help her with expenses.

Sara Paulson, 34, was injured in a hit-and-run crash last week in the city's Gold Coast neighborhood. Police are searching for the driver.