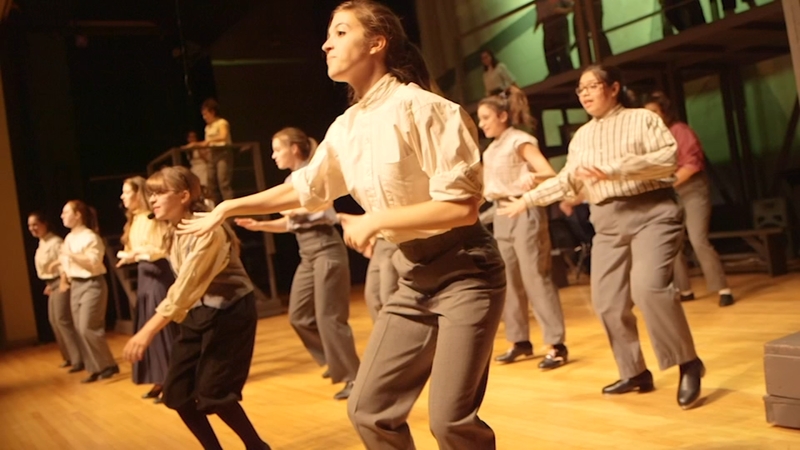 RIVER FOREST (WLS) -- The classic musical Newsies is getting a new twist at an all-girls high school in west suburban River Forest, where the school and musical share an empowering mission.

"The thing I love in the empowerment of women," said Pat Henderson, the school's performing arts teacher. "That is what we do here."

The production does feature one boy in a major role, but the entire rest of the cast is made up of Trinity students. Along with casting girls into some of the male roles, Henderson also changed a few of the roles over to become female.

Senior Parker Phillips, who plays the antagonist Joseph Pulitzer, was excited to participate in a new take on Newsies.

"They are really going an extra layer of struggle," Phillips said. "Not only are they born homeless and trying to make as much money as they can with no wages and anything like that. But in addition to that, they're girls in the 1920s."

Kathleen Burns, another senior who was cast as lead character Jack Kelly, said Newsies was the first musical she loved.

Freshman Ruth Fangmann was initially nervous to audion, but felt she was cast in the perfect role.

"My character is a 10-year-old boy, and he is like a super enthusiastic character and like kind of spunky too," Fangmann said. "I feel like I can play that little brother type role."

Henderson said her entire cast and crew share her passion for Newsies.

"To see young people getting excited about something that I love so much, it's the best thing that you can get," Henderson said.