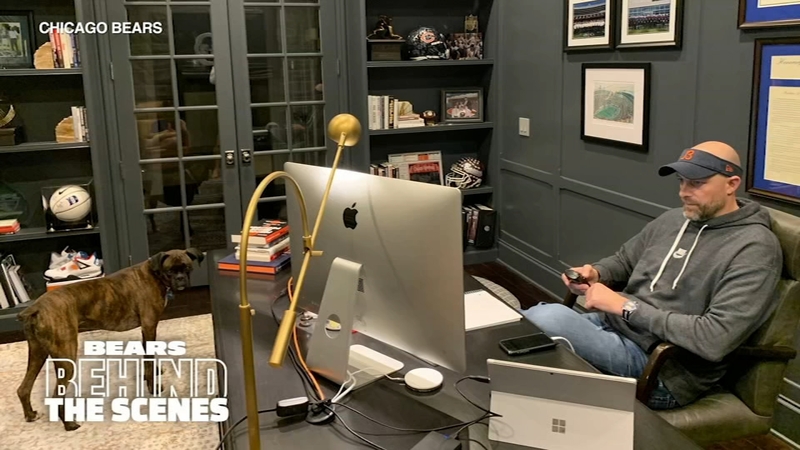 NFL Draft 2020: Chicago Bears get ready for Day 2 of draft

CHICAGO (WLS) -- The Chicago Bears made seven selections in the 2020 NFL Draft, which is being held virtually for the first time ever due to the coronavirus pandemic.

The draft was broadcast on ABC and ESPN. The first round got underway 7 p.m. Thursday. Rounds two and three took place Friday and rounds four through seven began at 11 a.m. on Saturday.

Bears take pair of offensive linemen in seventh round

With back-to-back picks in the seventh round, the Chicago Bears selected offensive tackle Arlington Hambright out of Colorado and guard Lachavious Simmons from Tennessee State.

The Chicago Bears made a trade with the Minnesota Vikings for pick 155 in fifth round and selected Trevis Gipson, a defensive end from Tulsa.

With their second pick in the fifth round, 163rd overall, the Bears selected cornerback Kindle Vildor out of George Southern.

Vildor was first team All Sun Belt in 2018 and 2019 despite missing time due to injury last season. In 11 games last season, Vildor had 27 tackles, three for loss, two interceptions and six pass breakups.

The Bears then made another trade, acquiring the 173rd overall to draft Darnell Mooney, a wide receiver from Tulane.

The Chicago Bears made Utah cornerback Jaylon Johnson their second pick in the second round of the NFL Draft.

Johnson was the Bears' pick in the 50th overall round of the draft.

Johnson fills a void in the secondary where the Bears were looking to complement Kyle Fuller. A first-team, All Pac-12 selection the past two seasons, he had two interceptions and a team-high 11 pass breakups as a junior last year.

The Chicago Bears addressed one of their biggest weaknesses on a struggling offense by drafting Notre Dame tight end Cole Kmet with the No. 43 overall pick Friday night.

The sure-handed, 6-foot-6 Kmet started 11 games as a junior last season after missing the first two because of a broken collarbone and caught 43 passes for 515 yards and six touchdowns. Bears tight ends combined for just 395 yards last season.

The Bears did not make a pick in the first round after using it to acquire Khalil Mack from the Oakland Raiders.

Packers may have found Rodgers' successor

After trading up with Miami to go from 30th to 26th, the Packers pulled off probably the most stunning move of the first round.

Love is a developmental project compared to the other three quarterbacks taken earlier - LSU's Joe Burrow, Alabama's Tua Tagovailoa and Oregon's Justin Herbert. And remember that Rodgers, now 36, sat behind Brett Favre early in his career.

San Francisco also made a deal and moved up six positions by trading with Minnesota, and at No. 25 added a receiver to a group that lost veteran Emmanuel Sanders in free agency. Arizona State's Brandon Aiyuk was the pick, while the Vikings moved down to 31st overall.

Seattle boosted its linebacking group with Texas Tech's Jordyn Brooks, followed by Baltimore - which had the NFL's best record in the regular season - taking LSU linebacker Patrick Queen with the 28th pick.

Las Vegas, which was supposed to host this year's draft before it was converted to a virtual format because of the coronavirus pandemic, will host the 2022 draft.

Next year's draft will be held in Cleveland.

The 2022 draft will use the same locations that had been planned for this year, including a main stage next to the Caesars Forum Conference Center on the Strip. Caesars Entertainment is the NFL's official casino sponsor.

The NFL had long been opposed to betting on its games but has softened its stance on gambling since a Supreme Court decision allowed all 50 states to legalize betting on sports.

The Raiders will play in Las Vegas starting this season after leaving their longtime home in Oakland.

C.J. Henderson doesn't have to go very far for his pro football job.

The Florida cornerback was selected ninth overall by Jacksonville. The Jaguars are seeking a solid coverage guy after trading Jalen Ramsey to the Rams last year.

Henderson has good size at 6-foot-1, 204 pounds, and is very quick. He covered the top wideouts the Gators played and usually dominated when healthy - an ankle injury limited him to nine games last season, but he still had 11 passes broken up.

Simmons was the Butkus Award winner as the nation's top linebacker last year, but he was used in numerous positions for the Tigers. He lined up at safety, slot corner and edge rusher at times. He has defensive back speed at 6-foot-4, 238 pounds.

The selection is the first for a new regime with Carolina as coach Matt Rhule looks to rebuild. The 6-foot-5, 326-pound Brown could be the anchor of the defense going forward.

Herbert had a strong postseason, including a terrific Senior Bowl week that raised his stock. At 6-foot-6, 236 pounds, he has the size the pros like, and he's a good athlete. But he also is not as accurate passing as he'll need to be.

Los Angeles had a burning hole at quarterback after letting go of long-time starter Philip Rivers. Plus, the Chargers plan to move into a new stadium and could use someone to help sell tickets.

A former sixth-stringer for the Ducks, he comes from a football-playing family going back to his grandfathers.

The Alabama quarterback, whose resume is as strong as any player in this draft were it not for several injuries in his college career, went fifth overall to a team that was accused going into last season of "Tanking for Tua." Tagovailoa comes off major hip surgery, which made his landing spot one of the first round's biggest uncertainties. A completely healthy Tagovailoa might have been the top overall pick.

Blessed with a quick release, excellent mid-range accuracy and nimble feet, Tagovailoa threw 76 touchdown passes in 24 starts the past two seasons. He helped the Crimson Tide to the 2017 national title.

The first offensive tackle in a strong group went off the board fourth overall when the New York Giants selected Georgia's Andrew Thomas.

A team leader with the Bulldogs, he can play left or right tackle. Thomas goes 6-foot-5, 315, has strong hands and experience. He was a three-year starter and an All-American last season.

The Giants sought a young tackle to protect last year's first-rounder, quarterback Daniel Jones. They now have him.

The Detroit Lions grabbed the highest-rated cornerback in this year's draft by taking All-American Jeff Okudah of Ohio State.

A smooth and physical presence on the corner, Okudah can handle all sorts of coverages. He became the 11th Ohio State cornerback taken in the first round since 1999. He figures to start in a division featuring opposing receivers Davante Adams and Adam Thielen.

Many scouts and NFL personnel people believed Young was the best overall talent in this draft. With the heavy focus on (obsession with?) finding quarterbacks, Young went second overall behind LSU QB Joe Burrow to Cincinnati.

At 6-foot-5, 264 pounds, Young led the nation in sacks with 16 1-2 and forced fumbles with six last season. The All-American won the prestigious Bednarik and Nagurski awards in 2019, leading the Buckeyes to the Big Ten title.

No surprise atop this NFL draft as the Cincinnati Bengals have selected Joe Burrow, quarterback of national champion LSU, as the centerpiece of yet another rebuilding job.

The previous time Cincinnati grabbed a Heisman quarterback to open the draft, it was Southern California's Carson Palmer in 2003. Palmer led the Bengals to the playoffs twice.

In his spectacular season, Burrow threw for 60 - yes, 60 - touchdowns with only six interceptions. The Tigers beat six top 10 teams on their way to the national title.

ESPN analyst Todd McShay said he won't be part of the network's broadcast of the NFL draft because he's recovering from the coronavirus.

McShay said in a statement that he'd be back and thanked the tireless work of health care workers and first-responders, calling them "truly our nation's heroes."

Because of the pandemic, this year's draft will be held remotely and broadcast on ESPN, ABC and NFL Network.

The first round is Thursday night and McShay, who has been at ESPN since 2006, was slated to be part of ABC's prime-time network coverage.

The NFL Draft will be a remote affair due to the pandemic. The Bears and every other team will select players via video chat.

That's OK with Bears General Manager Ryan Pace, who says despite some technical glitches at his home office, they'll be ready to take the best player available.

"The focus has just been hey, this is the draft and let's go," Pace said. "We feel very prepared. I think the good teams right now deal with the circumstances, they adapt to the circumstances. If you do it better than the other teams, that is a competitive advantage for us."

Pace says the team will address the status of quarterback Mitch Trubisky's contract, which includes a 5th year option deadline coming next month, as soon as the draft is over.

The Bears made five picks in the 2019 draft, with their highest pick coming in the third round.

Montgomery appeared in all 16 games for the Bears last season, making eight starts. Montgomery rushed for 889 yards on 242 rushing attempts with six touchdowns.

He also had 25 catches and 185 receiving yards and one touchdown reception.
Round 4, 126th overall: Riley Ridley, WR, Georgia

Ridley appeared in five games for the Bears and had a total of six catches and 69 receiving yards.

Shelley appeared in a total of nine games for the Bears and did not make a start.

Whyte Jr. did not appear in a game for the Bears was assigned to the team's practice squad. He was subsequently signed by the Pittsburgh Steelers and appeared in six games for them, with 24 carries and 122 rushing yards.

The Bears waived Denmark before the season started and was signed to the practice squad. He did not appear in a game for the Bears last season.