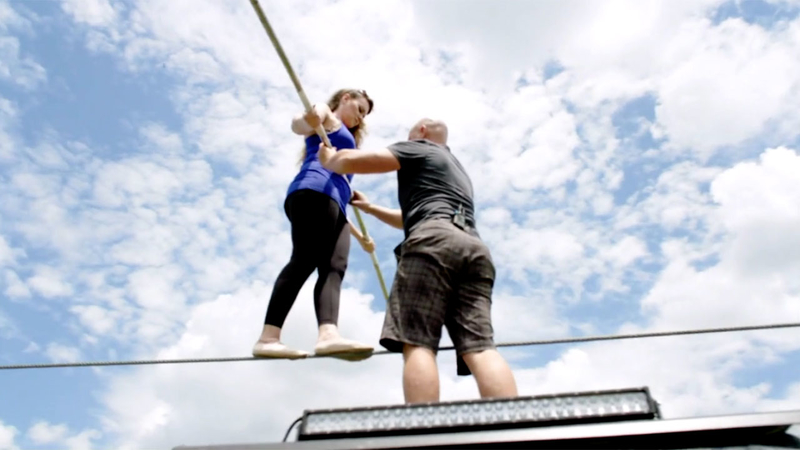 Wallendas reflect on 2017 accident ahead of Times Square stunt

NEW YORK -- As Nik and Lijana Wallenda prepare for their first live high wire performance together since Lijana's harrowing 2017 accident, the brother-sister duo said they're nervous but also looking for closure.

Two years ago during a rehearsal for an eight-person pyramid stunt to break a Guinness World Record, something went awry, and five performers were injured, falling 30 feet. Lijana suffered severe injuries to her face that required reconstructive surgery.

"Last time I was up higher than that, my worst nightmare came true. It's really emotional," Lijana Wallenda told "Good Morning America" on Friday.

That didn't stop her from getting back on the wire.

"She wanted to close that circle that was left open from the accident," Nik said.

The stakes and the wire are even higher for Lijana's return. They're taking to a wire that's two times higher and four times longer than anything Lijana has done before. For an added twist, the Wallendas will have to combat an eight-story incline, crossing Times Square from the 17th story of one building to the 25th story of another.

The siblings will walk from opposite ends of the 1,300-foot wire suspended between the towers, crossing each other in the middle. They'll be wearing tethered safety harnesses required by the city in case they fall.

"I am nervous, I will tell you the truth," Lijana said.

"When she gets up here, I don't know that she'll take that first step," Nik added.

The Wallenda family has been a star tightrope-walking troupe for generations, tracing their roots to 1780 in Austria-Hungary, when their ancestors traveled as a band of acrobats, aerialists, jugglers, animal trainers, and trapeze artists. They never use nets in live shows or in rehearsals.

Michael Strahan and Erin Andrews will host ''Highwire Live in Times Square with Nik Wallenda'' at 8 p.m. ET on June 23 on ABC.