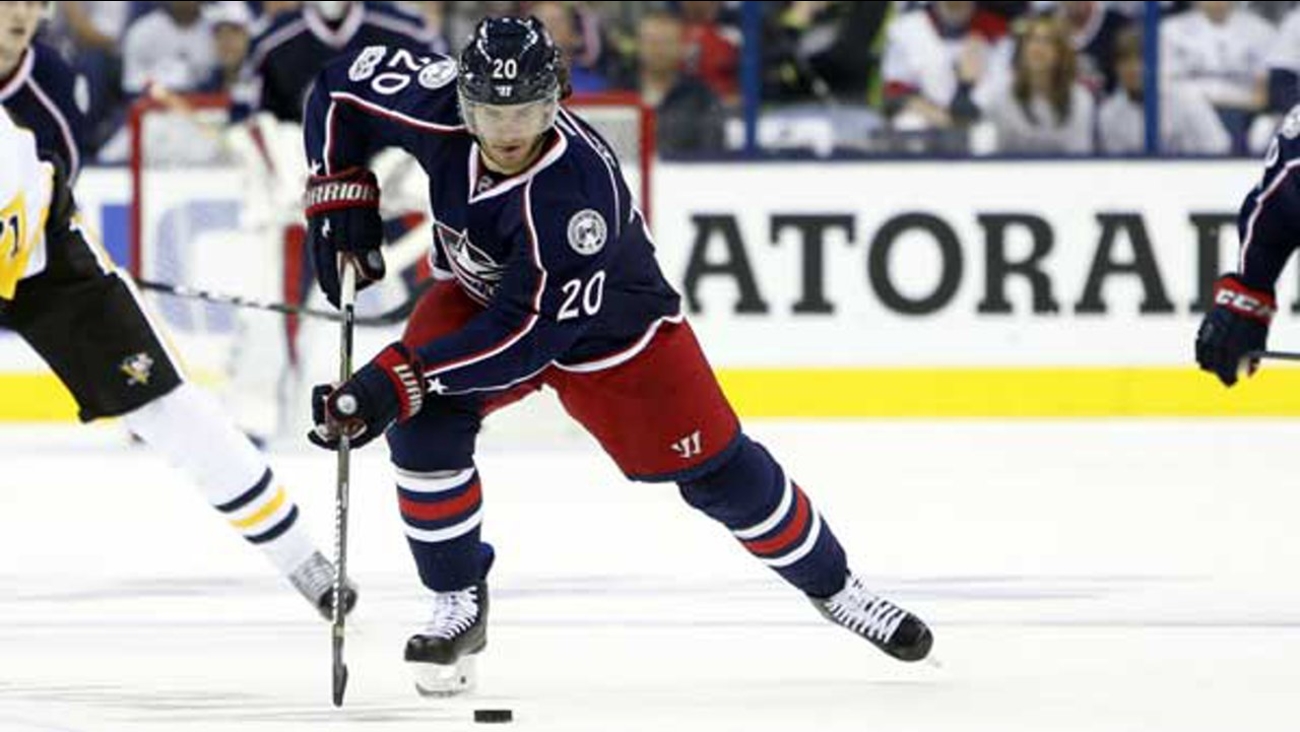 CHICAGO (WLS) -- The Chicago Blackhawks made a pair of blockbuster trades Friday, saying farewell to one Stanley Cup Champion and welcoming back another.

In the first trade, the Blackhawks traded defenseman Niklas Hjalmarsson to the Arizona Coyotes in exchange for defensemen Connor Murphy and Laurent Dauphin, the team announced.

But Blackhawks GM Stan Bowman was not finished there, trading wingers Artemi Panarin, Tyler Motte and a 6th round draft pick to the Columbus Blue Jackets for Brandon Saad, goaltender Anton Forsberg and a fifth round draft pick in the 2018 NHL Draft.
Hjalmarsson, 30, was a key player in the Blackhawks recent run of three Stanley Cups and has played his entire 10-year career in Chicago.

"Niklas' contributions to the three Stanley Cup championship teams are well known but his dependability as a teammate, selfless attitude and the way he represented the Chicago Blackhawks on and off the ice are what made him such a beloved member of the organization," said Chicago Blackhawks Senior Vice President and General Manager Stan Bowman. "He made his debut in Chicago in 2008 and quietly established himself as one of the toughest competitors in franchise history. We wish he and his family continued success."

Murphy, 24, recently completed his fourth season in the NHL and had 2 goals and 15 assists in 77 games last season with the Coyotes, who selected Murphy with the 20th pick in the 2011 NHL Draft.

Dauphin, 22, has played in 32 career games with the Coyotes over the last two seasons, scoring three goals and one assist.
Panarin, 25, just finished his second season with the Blackhawks. The winger scored 31 goals and 43 assists last season and won the Calder Trophy as the NHL's best rookie for the 2015-16 season. Motte, 22, scored four goals and three assists in 33 games for the Blackhawks last year in his rookie season.

"We thank Artemi for the immediate impact he made on our lineup during his seamless transition to the NHL," Bowman said. "His rookie year will always rank among the best in franchise history and his exciting style of play provided many memorable moments for our fans during his two seasons as a member of the team. Tyler has a bright future in this league and we appreciate his contributions and hard work he put in. We wish them both success in Columbus."

Saad, 24, won two Stanley Cups in four seasons with the Blackhawks before being traded to the Columbus Blue Jackets prior two seasons ago in exchange for Artem Anisimov and Marko Dano. Saad scored 24 goals and 26 assists for the Blue Jackets last season.

Forsberg has played in 9 career NHL games, recording a 4.07 goals against average and a .897 save percentage.

The trades come after earlier this week the Blackhawks announced that Marian Hossa would miss the entire season because of severe side effects from medication to treat a progressive skin condition.

Chicago is hosting the NHL Draft for the first time this weekend.

Hockey fans are on cloud nine as the NHL holds its draft in Chicago this weekend, but there's more to see than players getting drafted.

"How often is the NHL Draft going to be here in Chicago, I mean we couldn't miss it for anything" said hockey fan Sally Turty.

The 2017 NHL Draft is being held at the United Center Friday and Saturday.

"We can't wait for the draft to start tonight in Chicago because from around the work they're going to see what a great city we have," said Blackhawks Chairman Rocky Wirtz.

In the 100-year history of the NHL, the Windy City has never hosted the draft, despite the Hawks being a centerpiece of the NHL, winning three Stanley Cups this decade and hosting four All Star Games.

"I think this is the 54th year of drafts and it's about time we came to Chicago," said NHL Commissioner Gary Bettman.

And while the draft goes on inside the UC Friday night, there'll be an interactive fan fest outside, featuring lots of entertainment including a museum, a street hockey rink, a virtual reality Zamboni experience, and the Stanley Cup.

The experience is a similar yet scaled down version of the NFL's Draft Town which was here for a couple of seasons, generating more than $81 million. City officials still expect this weekend to have a positive economic impact.

"Chicago is a hockey town. Chicago, all of Chicago, is a Blackhawks town," said Mayor Rahm Emanuel.

Both former and current Blackhawks say having the draft here is great.

But for 7-year-old Matthew Turty, the day is about living out his dream of becoming a professional hockey player.

"You just have fun out there and it's like one of your dreams to go on the ice," he said.