WLS
By Diane Pathieu and Karen Jordan
SKOKIE, Ill. (WLS) -- One week after allegations of hazing led to criminal charges against five football players at Wheaton College, officials at Niles North High School received word of an alleged hazing incident and shut down the football program.

Niles North students learned Tuesday morning the full details of the hazing allegations, which have not yet been made public. Some students said it was just boys roughing each other up in the locker room and was not meant to be serious.

"They were trying to get the littler kids on varsity - like sophomores - to like, focus more and do better so they can stop losing games and stuff. But they took it the wrong way," said Christian Foreman, a senior.

Adrian Brown just graduated from Niles North. He was on the football team and knows many of the players involved in the incident. Brown said he believes suspending the team was too harsh.

"In my opinion, I don't think it was really an act of hazing. I think it was just, like, my teammates being immature. I played with them last year. We goofed off a lot, I'm not going to lie. It's just part of it. It's part of high school, obviously," Brown said.

But Ali Syed, a member of the wrestling team, said the hazing policy is very clear and allegations like this look bad on the entire school.

"It makes it, like, scarred, as a team. Even though the rest of the team is good, the actions of a few individuals make it seem as if the entire team does something," Syed said.

The announcement comes on the heels of criminal charges filed against five Wheaton College football players in connection with an alleged hazing incident involving a freshman teammate in 2016.

Niles North officials sent a letter to parents Monday, letting them know that a possible hazing incident took place over the weekend and varsity football operations were suspended until further notice.

"We have zero tolerance of hazing or even the threat of it. Because this is a matter that involves student confidentiality, we ask that our students and families be patient as the investigation unfolds," Niles North High School Principal James Edwards said in a statement.

"I was alarmed. I was a little shocked. But I hear about stuff like this going on in colleges too. So I wasn't, you know, totally shocked," said Aneup Saxena, a Niles North parents.

The Skokie Police Department has been notified and is investigating, school officials said. Police said student athletes and the coaching staff will be interviewed over the next few days.

Anyone with information regarding the alleged hazing incident should call Skokie police at 847-982-5900 or the 24-hour Crime Tip Hot Line at 847-9338477. To text a tip, send a message to 847411 and include "Skokie" along with the tip information. Callers and those who text in tips may remain anonymous. 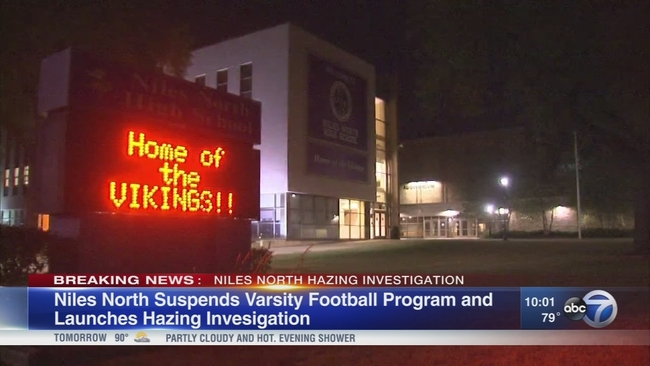