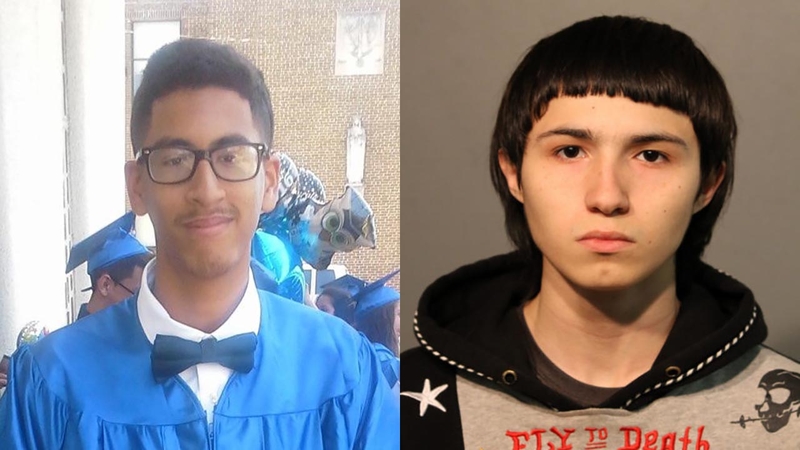 CHICAGO (WLS) -- A 17-year-old was charged as an adult and given no bail Thursday in the murder of a Northside College Prep student in Chicago's Old Irving Park neighborhood.

Emanuel Gallegos, also 17, was on his way to get his hair cut Monday night when he was shot in the neck while traveling in a car in the 4400-block of West Addison Street.

Gallegos was transported to Illinois Masonic Medical Center, where he was pronounced dead.

Police said the shots came from a male standing on a corner near Schurz High School, a Chicago Public Schools campus at 3601 N. Milwaukee. Two other males were with the shooter and joined him in yelling gang slogans at Gallegos before opening fire, police said.

The suspect, identified by Cook County prosecutors as Luis Castejon, was taken into custody around 11:30 a.m. Wednesday in the 2400-block of West Belmont Avenue.

Prosecutors said that just before Castejon, an alleged gang member, fired at the vehicle Gallegos was riding in, he asked one of the passengers his gang affiliation.

"The witness denied any affiliation and the group, including the defendant, walked away from the witness. As the victim and witness drove past the defendant, the driver slowed and saw Luis Castejon pull out a handgun," Assistant State's Attorney Jamie Santini said.

Castejon was charged as an adult with first-degree murder, one day after police released a photo of a person of interest they were looking for.

At his bond hearding Thursday, a judge ordered Castejon held without bail.

"I just asked if he's OK, like I do all my clients, and I gave him a reassuring pat on the back," said Richard Blass, Castejon's attorney.

Steve Jaimes, whose car was shot into, said the gunman didn't think twice about opening fire.

Jaimes said Gallegos was kind and ambitious and his death has "scarred" him.

Friends and family believe this was a tragic case of mistaken identity. Police said they have no history with Gallegos, who was focused on school.

On Thursday, his family and friends were still trying to cope with the pain.

"I had class with Emanuel. He sat like right behind me in the morning. That was the first class we had, too. So just seeing his empty seat, hearing the news beforehand, was just really jaw-dropping," said Ashley Sampange, a student.

"This entire situation such a tragedy. But for Manny, I'm glad that justice can be served in some way," said Sander Brissman, another student.

A vigil for Gallegos is scheduled for Monday at Northside College Prep.

Funeral prayers will take place at 9 a.m. Saturday at The Elms, followed by a funeral mass at 10 a.m. St. John Bosco Church, 2250 N McVicker Ave. in Chicago, and internment at Queen of Heaven Cemetery.