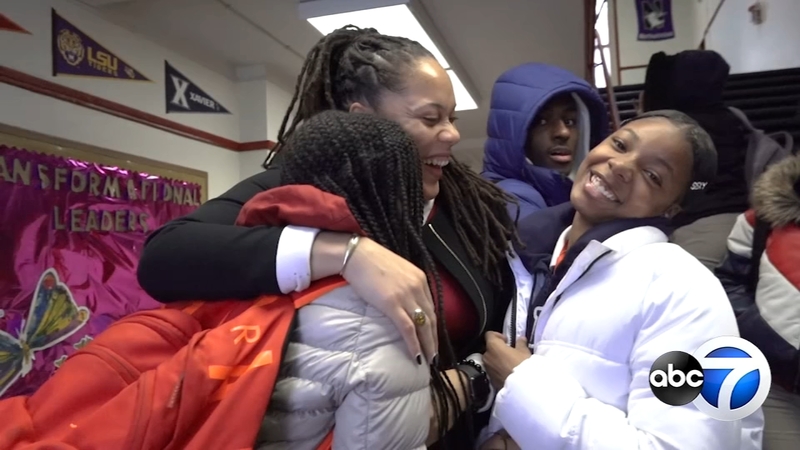 CHICAGO (WLS) -- From afar, Arriel Azadi Williams might look like one of the North Lawndale College Prep's high schoolers, but in September she became the school's principal.

"I did not perceive myself to be a principal," Williams said. "If you were to have asked me this in 2008 when I graduated high school, you wouldn't have been able to tell me I'd be in this seat."

Not too long ago, Williams, 29, roamed the North Lawndale halls. She said the school was a safe haven and changed the trajectory of her young life.

Williams was an honor roll student and was heavily involved in almost every extracurricular. Her academic success continued in college where she majored in theater. Williams said she couldn't have done it without her high school teachers.

"The teachers were in my corner making sure I was socially, emotionally well, because it feels like a lot of pressure when you feel like you're trying to set precedents for your family, trying to break that cycle," she said.

Arriel Azadi Williams, a North Lawndale College Prep alum, became the school's principal in September. She aims to inspire other students to reach their dreams.

"She believes in our students in a way that brings them along this journey because she's taken it," said Dr. Garland Thomas- McDavid, president of North Lawndale College Prep.

The 29-year-old created a Drama Therapy class to help students cope with their trauma.

"If we had more teachers like that, that had the passion to teach the children, to help shape the children, we could have more, like, Arriels in our neighborhood coming out of the North Lawndale community," said Jeanette Starks, Williams' mother.

Williams said her goal is to make the students reach for their dreams.

"I wanted to be able to be the person to help build resources to make that possible and easier for them," she said.