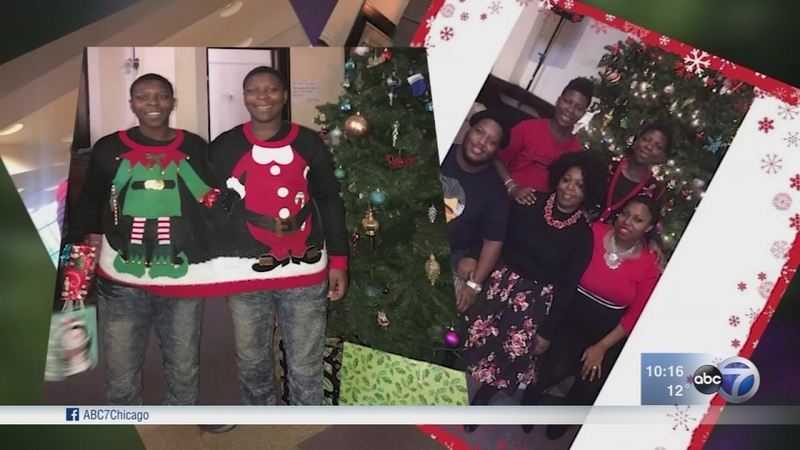 It's been 10 months since ABC7's Stacey Baca met Floyd and Lloyd Russell on a cold February night in North Lawndale. They were 13-year-old twins at a community event. A 2-year-old boy and his uncle had been shot and killed. The community and police gathered to share resources, and the pain of yet another shooting in a Chicago neighborhood.

Floyd and Lloyd's all-present mother was not there at the time. I quickly learned she is a force in their lives.

To my knowledge, Floyd and Lloyd have never been involved in a shooting, and their mother works tirelessly to make sure that's the case. On Chicago's streets shootings are always a possibility, even if you're an innocent bystander.

ABC7 was there on the twins' first day of school in September, and covered an event at their church in the fall.

Now it's December; winter in Chicago.

December, at least for the Russell family, is loaded with important dates running the emotional spectrum. The twins' dad died of pneumonia on Dec. 10, 2015. The twins celebrate, or at least try to celebrate, their birthday just eight days later on Dec. 18. They just turned 14.

And, of course, December wraps up with Christmas.

It's a busy month for the twins. This year that's compounded as their family moved to a new apartment.

"December. The devil tries to trick my entire family that December is a bad month for us," said their mother Lisa Russell. "But I say we are Christians. God gave us his greatest gift and that was his son."

Lisa Russell has focused on Christmas and the twins' birthday, knowing how difficult the anniversary of their father's death was for them.

It's hard for the twins to talk about their dad's death. But they do thanks to the Lawndale Amachi Mentoring Program, also known as LAMP. The twins have been in the LAMP program for at least seven years. When their father died, LAMP provided much-needed counseling so the twins could grieve and talk about their loss.

"It helped me since my dad passed, a lot," Lloyd said.

Floyd misses his dad too.

"He's not in my presence," he said. "I'm used to him in my presence, giving me a gift, just talking, sitting down and stuff. I can't believe it, but that's a part of my life."

The founder of LAMP, retired Chicago Public Schools principal Dr. Betty Allen-Green, said the twins saw a counselor for about a year after their father's death. She said counseling has made a difference.

"I think it worked well," she said. "Now they are able to talk about [their dad's death] without tearing up. They realize their father is not with them, but maybe they'll see him one day."

LAMP provides counselors, tutors, and mentors. There is work and play. During the December school break, dozens of children, including Floyd and Lloyd, take part in daily field trips, like going to lunch and a movie or maybe seeing a museum.

"Children need at least three positive role models in their lives," Dr. Allen-Green said, noting the twins' mom is often involved. Floyd and Lloyd "have a mentor, they have their mother, and when they are at LAMP, it's like a family here."

Right now, LAMP has more than 230 children in the program. The group recently had a Christmas program featuring dozens of children. Lisa Russell was sure to be there, watching her sons in the program. And Lisa Russell has nothing but praise for LAMP and Dr. Allen-Green.

"She believes in all these children. And that's the thing - it makes them believe in themselves," Lisa Russell said. "She also reaches out to the whole family - and that's the most important part of this whole program."

LAMP may be one pillar in the twins' lives, but they also recognize others, like their mom and their entire family. "She's like my everything to me," Floyd said about his mom. "I'm just glad I have a family that support me. We stay together."

Along with support, the twins are also pushed to have goals, dreams. In 2018, they are both looking forward to graduating from the 8th grade.

"My goal is to finish grammar school and go to high school," Lloyd said. "I want to get my diploma and everything, so I can be something in my life."

You can bet ABC7's cameras will be rolling during their 8th grade graduation and the days ahead. We will continue to follow the twins in 2018. After all, Lisa Russell and her sons are willing to share their lives, and the challenges too, so all of us can get a better understanding of what life is like growing up in one of Chicago's toughest neighborhoods.
Report a correction or typo
Related topics:
societychicagonorth lawndalechicagotwinscommunity
Copyright © 2022 WLS-TV. All Rights Reserved.
RELATED
Floyd and Lloyd: A West Side story
13-year-old North Lawndale twins head back to school
13-year-old North Lawndale twins take part in church's Thanksgiving gala
TOP STORIES
Expect more worrisome COVID variants after omicron, scientists say
Ghislaine Maxwell ends fight to keep names of 8 'John Does' secret
UK detains 2 teens in connection to Texas synagogue hostage incident
Walgreens, CVS temporarily close some stores as COVID surges
Bob Saget's widow posts heartfelt tribute to late comedian
'Our way of giving back': Family makes care packages for homeless
'Mistaken gunfire': Wis. police investigate homicide of 8-year-old
Show More
Chicago weekend violence leaves 29 shot, 4 fatally: CPD
Chicago Weather: Mainly overcast Monday
Activists call for civil rights charges against Jason Van Dyke
Unity rally aims to spread awareness, end gun violence
Newborn found dead in duffle bag outside CFD station: police
More TOP STORIES News