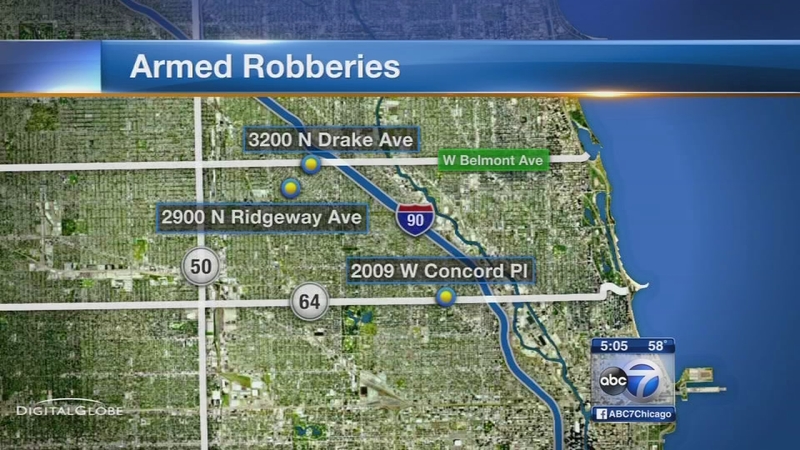 CHICAGO (WLS) -- Police say an attack on a man in Bucktown Monday is now linked with two other robberies in the city's Northwest Side.

A Chicago alderman says one of the suspects wanted in connection with the robberies has been arrested.

Mark Gill was walking down a Bucktown alley Monday when surveillance cameras captured him just seconds before a robber shot him in the eye.

The angle of the bullet may have saved him.

"Luckily, apparently when he turned to fire, given the trajectory of what entered my eye was able to duck enough. They were curious to know how it came through the top part of my eye," Gill said.

The bullet went through his eye and into his cheekbone. Not his brain.

Police say a man and woman robbed Gill in the alley and then jumped into a black Honda coupe driven by another man.

"The police are trying to be proactive, but they can't be on every corner. They did a good job reacting to this one, they've already caught one of the women involved in it and the car," said Ald. Scott Waguespack, 32nd Ward.

Along with the Bucktown robbery, police say the suspects and car are linked to two other robberies Monday night in Avondale.

Police say the robbers allegedly targeted a victim on the 3200-block of North Drake around 9 p.m.

"I walk around every night to make sure my neighborhood is safe, and for me now to find out these are linked. It's wrong," said John Mercado, an Avondale resident.

At 9:30 p.m., police said the alleged robbers struck again, less than a mile away in the 2900-block of Ridgeway.

"It's usually pretty quiet at night too, not a lot of through traffic. The street kind of fills up with parking and that's it," said Kevin Brody, an Avondale resident.

"I'm blind in my left eye right now - long-term prognosis is uncertain, but with hope, I'll get some vision back, but you never know," Gill said.