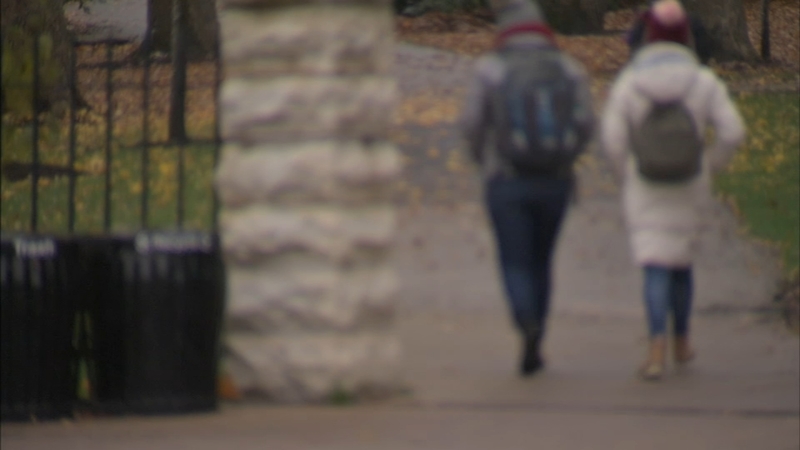 EVANSTON, Ill. (WLS) -- A safety alert was sent out to Northwestern students overnight after several incidents in which men attacked female students who were walking alone, police said.

Three separate incidents on or near Northwestern's campus in north suburban Evanston have been reported.

The most recent incident occurred just before 8 p.m. Thursday in the 1800-block of Hinman Avenue. Police said a woman was walking on the sidewalk when two men approached her from behind.

The woman felt one of them grab the top handle of her backpack, the alert said, and she took off running. The suspects ran in the opposite direction, police said.

A similar incident occurred on Nov. 4, in the 600-block of University Place.

Police said a female student was waiting to be picked up near Scott Hall Circle when someone approached her. As she tried to walk away, he grabbed her from behind and asked for her phone number.

She was able to get away and call police. They caught the suspect. Yontan Vazquez, 21, was charged with battery. Vazquez has no affiliation with Northwestern, university officials said.

On Oct. 28, a female student was crossing the street near Chicago Avenue and Sheridan Road when police said someone grabbed her by her backpack.

The suspect told her he wanted to take nude pictures of her. She was able to get away.

"I don't know if it's the same group of people or if it's just, like, copycat crimes, where they hear that it's happening so they're jumping on the bandwagon," said Adia Fielder, a sophomore at the university.

Fielder said she and other women on campus planned to take extra precautions.

"We've started calling Ubers for people, even to go short distances on campus or making sure we're not going anywhere alone," she said.

"I only have one headphone in, and I listen to the people around me," said Maya James, another Northwestern student.