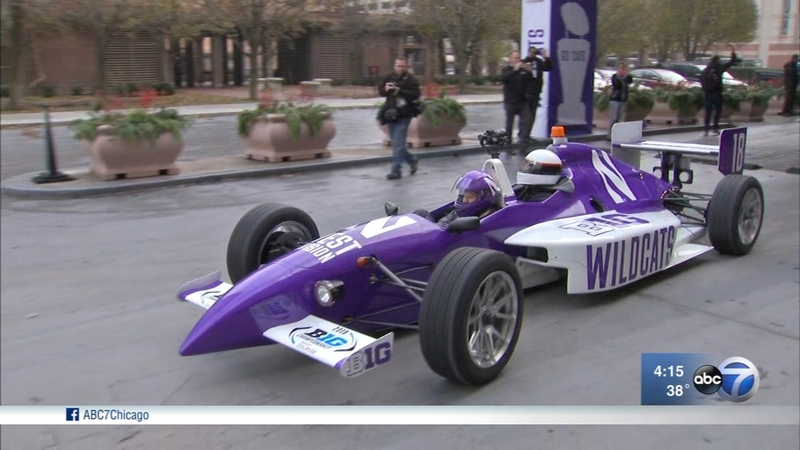 NU Wildcats arrive in Indy ahead of Big Ten Championship

INDIANAPOLIS (WLS) -- The Northwestern Wildcats could make Big Ten history this weekend as they prepare to take on Ohio State for a trip to the Rose Bowl.

With an Indy car escort, the Wildcats rolled into Indianapolis Friday ahead of their Big Ten Championship debut. Among them was starting center and Indianapolis native Jared Thomas.

"If you would have told me this in high school, while I grew up here, I would have kind of looked at you funny because I didn't think that this would be a possibility," Thomas said.

Northwestern fans are pumped for the Wildcats' debut in the Big Ten Championship this weekend.

Even before the players stepped off the bus, their loyal fans could be seen walking through town. Naperville resident Ron Zapar, Class of '85, remembers the program's dark days.

"It was brutal. I was there when we broke the record for losing, so this is quite the treat," Zapar said.

"But honestly, I think we're just getting started," Zapar said.

Buckeye fans didn't wait to set up camp either. Bob Loughry and Jamie Francis drove in from Columbus, bringing Brutus along for the ride.

Indianapolis is gearing up, too, with Big Ten banners flying as the underdog 'Cats hope to pull off an upset against the No. 6 Buckeyes.