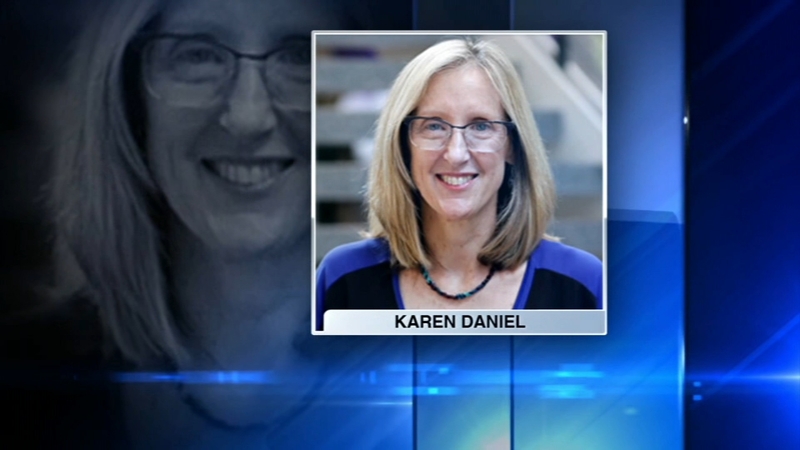 OAK PARK, Ill. (WLS) -- A former Northwestern University law professor, who helped exonerate more than 20 people, was struck and killed by a car in Oak Park Thursday morning, according to village and university officials.

Karen Daniel, 62, died from injuries sustained in the crash near the intersection of Pleasant Street and Scoville Avenue.

Karen Daniel, a former Northwestern University law professor, was struck and killed by a vehicle Thursday in Oak Park.

A 63-year-old Oak Park man was turning east onto Pleasant Street just after 8:30 a.m. when he hit her, Oak Park officials said.

Daniel, who once led the Northwestern's Center on Wrongful Convictions, died at the scene.

"This news is impossible to process, and yet somehow we must," CWC officials said in a statement. " We will remember and honor her by working every day to fulfill her legacy."

Daniel helped exonerate more than 20 people who were wrongly convicted during her time at the center, the center's officials said.

She stepped down from her role as the center's director earlier this year, according to Northwestern officials.

"Karen was a fierce, tenacious and brilliant lawyer-advocate whose life's work was fighting for justice," said Kim Yuracko, dean of Northwestern's Pritzker School of Law. "She was universally beloved by her students, clients and colleagues, and her passing is felt near and far. It is a huge loss for the Law School and the innocence movement, and she will be dearly missed."

When Dana Holland walked free 16 years ago after spending a decade in prison for crimes he did not commit, Daniel, his attorney, was by his side.

"She not only believed in me, but she also allowed me to believe in myself," he said.

Daniel helped present DNA evidence that proved Holland was innocent of rape. But she was more than a lawyer to him; she attended his wedding, his 50th birthday party, and was with him two months ago when his daughter died of an illness.

On Christmas Day she sent him a text wishing him peace.

"She was a true, true saint," Holland said. "She loved people. And she loved giving."

Daniel also helped exonerate Alan Beaman, who spent 13 years in prison for a murder he did not commit.

"My family, my children, my career, everything I have and do now, without Karen it's all gone," Beaman said.

The driver was cited for failure to reduce speed and failure to yield to a pedestrian. He passed a field sobriety test and submitted to blood and urine testing, officials said. The investigation into Daniel's death is ongoing.

Anyone with information is urged to contact the Oak Park Police Department at 708-386-3800.

Information can also be provided anonymously by calling 708-434-1636 or online at oak-park.us.

"The time for eulogizing will come; at the moment, words seem totally inadequate. Karen was a warrior, a champion, and a hero. Over her twenty years at the Center, she exonerated more than twenty individuals, founded the CWC Women's Project, and taught a generation of law students never to forget their duty to fight for justice. She was also a damn good human being. While the Chicago legal community includes many heroes, it only had one Karen Daniel. Today, her place is empty, and we are heartbroken. This news is impossible to process, and yet somehow we must. We will remember and honor her by working every day to fulfill her legacy."
Report a correction or typo
Related topics:
oak parkcar crashfatal crashnorthwestern universitywoman killedcrash
Copyright © 2022 WLS-TV. All Rights Reserved.
TOP STORIES
Warwick Allerton Chicago shooting deemed murder-suicide: source
You can now order 3rd round of free at-home COVID-19 tests
Chicago curfew hours criticized after shooting at 'Bean'
Plans to build Carvana tower in Skokie on hold
Child killed after being hit by school bus in Cary
Metra UP-W service disrupted after pedestrian struck near Geneva
Suspect in custody in Lincoln Park Chicago shooting, robbery: CPD
Show More
Explosion damages 4 cars in Humboldt Park
New casino near IL-WI line expected to create 4.3K jobs, officials say
Chicago Weather: Partly cloudy, cooler Tuesday
Arrests made after CPD officer hit by vehicle following shooting: ald.
Baby formula maker Abbott says agreement reached to reopen plant
More TOP STORIES News