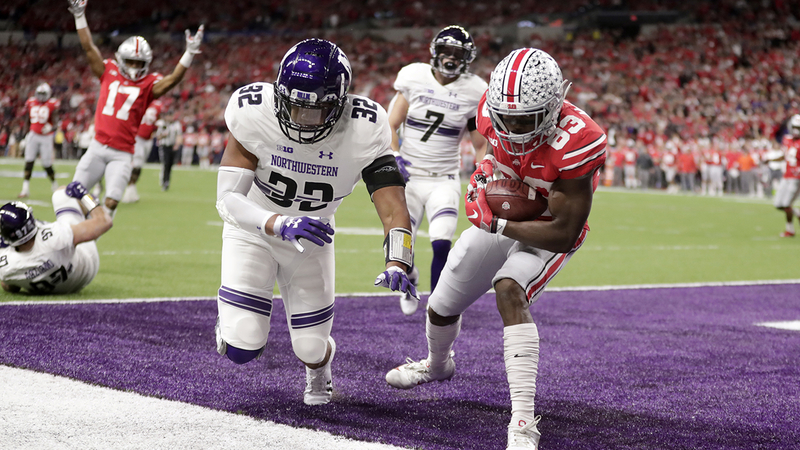 It would have been a major upset, and guarantee the Wildcats a trip to the Rose Bowl. However, Northwestern will now have to wait until Selection Sunday to learn their bowl destination.

Ohio State won the Big Ten championship for the second straight year, but their bowl destination is also unknown until Sunday.

Fans gathered in Evanston and the Chicago area to cheer on the team during their debut at the title game, but Wildcats fans came from around the globe - from as far as Switzerland and Britain -- to descend on Indianapolis.

"Zurich via Austria via London" was the route that Northwestern alum Samir Mayekar journeyed for the game.

Others with "purple pride" made shorter trips, but they still had to fly in.

"I had a deal with these guys that if they're in the Big Ten championship, we're there," said Rob Barmann, who flew from Minneapolis with his two young sons. "A promise is a promise, so we booked it."

Barmann, a 1996 Northwestern grad, was a senior when the Wildcats last played in the Rose Bowl. He went to Pasandena for the game.
"We're playing with house money right now. No one expects us to win. .. Ohio State's gonna be hurting," said Andres Otero who traveled from Washington, D.C. to cheer on his alma mater. He and friend Michael Greenberg (not ESPN's Greeny) predicted the Wildcats would do more than shock OSU -- they're expecting a blowout.

There are droves of Buckeye fans in Indianapolis who would surely disagree.

The Northwestern football team will play Ohio State Saturday night in Indianapolis for a spot in the Rose Bowl.

Those decked out in OSU gear have mostly traveled from Ohio based on our interviews -- although at least one man drove from Charlotte, North Carolina -- but there are plenty of them, definitely more scarlet than purple walking through downtown Indy.

Still, Wildcats from Chicago have a presence in Indianapolis.

More than 3,400 undergraduate students were scheduled to arrive via bus. Their road trip, including a bus ride, meal and game ticket, were all paid for by anonymous university benefactor, Northwestern announced in a press release.

NU's also getting some help from Big Ten fans who don't care who wins as long as Ohio State loses.

"We're all Penn State fans and we're masquerading as Northwestern fans today just because we want to take down Ohio State," said Mark Petzold who drove from upstate New York with some friends.

"We're not sure what the Northwestern chant is but we'll come up with something," he added.