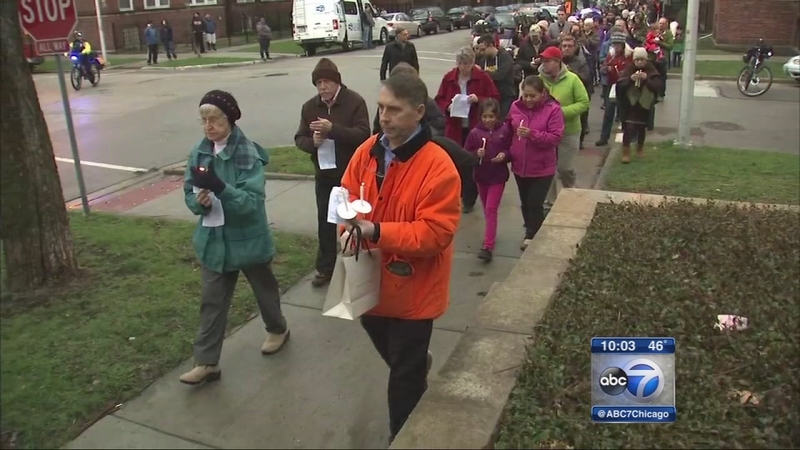 CHICAGO (WLS) -- A group of Benedictine nuns hit the streets Wednesday night to demand justice for a man who was shot and killed steps from their North Side residence two weeks ago.

Saint Scholastica Monastery in Rogers Park is home to the Benedictine Sisters of Chicago. The nuns did not know the shooting victim, but they say his violent death - regardless of the motive - is an affront to the entire neighborhood.

"We want the people in this area to know that we stand for peace and we stand with them," said Sister Benita Coffey.

Two weeks ago, the sisters were reminded of the challenges in their community when Antonio Johnson, 18, was shot and killed in front of the monastery.
EMBED More News Videos

Nuns on Chicago's North Side are holding a vigil against violence after a man was shot and killed not far from their residence two weeks ago.

"We will walk the same way that Antonio did, remembering his fear," Sister Benita Coffey said.

The nuns were joined by their Rogers Park neighbors in a show of unity and resolve as they retraced the path of a tragedy.

"There was a volley of shots. Maybe I think seven or eight shots rang out," Coffey said. "To have violence this close is pretty scary."

Witnesses said Johnson was hunted, and then executed. He was chased down the block before being shot multiple times from behind. After Johnson collapsed at the corner of Ridge and Birchwood, the gunman fired a bullet into his head. His family was left reeling.

"It's hard to say what the situation is, and our concern right now is not so much about what happened and how it happened. It's done. And we don't want to see no more families grieving or suffering with pain," said Stacy Rowzee, the victim's brother.

The nuns sprinkled holy water for the slain teen. And though most here didn't know Johnson, many say they didn't have to.

"You want people who are out here shooting to know that people do care because people tend to shoot and create crime when people don't care," said Bernard Garbo, a Rogers Park resident.

"We shouldn't as neighbors just sit quietly as these things happen and we shouldn't sit fearfully in our homes. We shouldn't have to live in fear," Coffey said.

Maria Calvillo has lived in the neighborhood for 36 years and welcomes efforts to reduce violence.

"It's positive to come out and talk and let everybody know it's not okay, it's really painful," Calvillo said.

The community policing sergeant for the district urges residents to take ownership of their neighborhoods.

"We really encourage our faith-based organizations to get more involved in the community. This is really a great step they're taking to offer up a sense of healing and bring everyone together," said Sgt. Shawn Sisk.

Johnson will be laid to rest on Thursday. Police continue to investigate, and no one is in custody at this time.