WABC
By Eyewitness News
MIDTOWN, Manhattan -- The New York City Department of Buildings is inspecting more than 1,300 structures after a woman was fatally struck by falling debris in Midtown Manhattan Tuesday.

It took less than 24 hours for a sidewalk shed to be constructed at the site on 49th Street and Seventh Avenue where 60-year-old Erica Tishman was killed.

Tishman was a well-respected Manhattan architect and vice president at Zubatkin Owner Representation, as well as a trustee of the Central Synagogue in Midtown who also served on the board of the Educational Alliance.

Officials are calling the incident a tragedy that could have been avoided, and the city is has already identified some of the 1,300 buildings that are "needing immediate repairs."

Attorney Susan Karten, who has represented families struck by debris, called it a systematic failure that could happen again.

7 On Your Side Investigates has discovered the building was cited back in April for "failure to maintain building walls" and that "several locations pose a falling hazard."

The company paid a $1,200 fine, but eight months later, there were still no repairs made even though city law requires action within 90 days.

"This could be anybody," Karten said. "It could be you, me, walking down the street, and all of a sudden, a piece of the building falls on you."

Karten says it can take months to get repair plans approved and for the city to sign off on them, but there's no requirement for scaffolding to go up right away to protect people down below. But she says there should be.

"That would be an excellent requirement to have a scaffold, a good scaffold, go up," she said. "Immediately."

We sent a list of detailed questions to the building owner, Himmel + Meringoff Properties, but a spokesperson refused to answer any of them. He instead referred us to the company's statement: "We are saddened by this tragedy and our hearts go out to the family. The company will fully cooperate with the city in the ongoing matter."

The DOB released the following statement after Tishman's death:

"This is a tragedy, and the family and friends of the victim are in our thoughts. No pedestrian should be at risk from dangerous facade conditions. Department of Buildings engineers are on the scene to perform a full structural stability inspection of the building to ensure all New Yorkers are safe, and conduct a thorough investigation into the cause of this tragic incident." 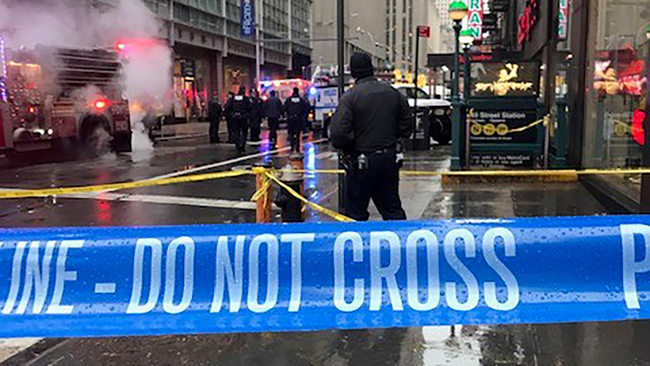