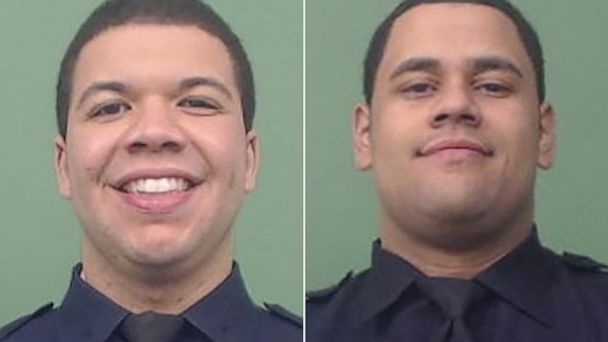 A rookie New York City officer is dead and another officer was in critical condition after they were shot responding to a domestic violence call in Harlem Friday night, police said.

Three officers responded to the scene of the call, West 135 Street, around 6:30 p.m., where a mother and her adult son, Lashawn McNeil, were fighting in a first-floor apartment, according to police.


The mother met police in the front of the apartment and when they went to a rear room to talk to McNeil, shots suddenly rang out, police said.

Officer Jason Rivera, 22, a rookie entered a hallway and was struck first, police officials with knowledge of the investigation told ABC News. Rivera, who was married, died from his injuries.

His partner, Officer Wilbert Mora, 27, tried to duck into the kitchen during the shooting, but was struck. Mora was listed in critical condition as of Saturday morning.

The third officer, a rookie who stayed with the mother in the front of the apartment, fired on McNeil, who was struck in the neck and shoulder, according to police sources.

The suspect was listed in critical condition as of Saturday morning.

A police body camera captured some of the shooting, police sources said.

"I am struggling to find the word to express the tragedy we are enduring," NYPD Commissioner Keechant Sewell said at a press conference Friday night. "We are mourning and we are angry. ... Our department is hurting, our city is hurting. it is beyond comprehension."

McNeil is believed to have had behavioral problems and posted anti-government and anti-police material on social media, according to police sources.


The suspect has five previous arrests, including one in New York City for felony narcotics possession in 2003. He was currently on probation for that arrest, police said.

Outside the city, McNeil was arrested for unlawful possession of a weapon in 1998, assaulting a police officer in 2002 and two other drug arrests in subsequent years.

He was staying with his mother to help her take care of her other son who has special needs, possibly a learning disability, the sources said.

When McNeil came up from Maryland in November, his mother ordered him not to bring guns into the house, because of his history with firearms, according to the source. She later told police she didn't know he had the weapon, the sources said.

The mother called police Friday night asking for help with McNeil, saying that, "We've been having problems," according to sources. Officers believed they were responding to a verbal domestic dispute since no weapons were mentioned, sources said.

The Glock. 45 used in the incident was reported stolen in Baltimore in 2017, police said. A licensed security guard said it was taken by her 13-year-old son, who sold it for money, according to investigators.

The teen was later arrested for the theft, but the gun was never recovered, police said.

Mayor Eric Adams called on the federal government to do more to stop the proliferation of guns in the city.


"We don't make guns here," Adams said Friday night. "How are we removing thousands of guns off the street and they are still finding their way into New York City?"

This has been a particularly violent week for the New York Police Department. Four NYPD officers have been shot in three incidents this week. The officers in the other shootings, which took place in the Bronx and Staten Island, did not suffer life-threatening injuries.

Attorney General Merrick Garland also spoke to Sewell Friday night and offered assistance from the Department of Justice or FBI if needed, according to DOJ spokesperson Anthony Coley.

"I am horrified by tonight's tragedy in Harlem," New York Gov. Kathy Hochul said in a statement. "My thoughts are with the family who answered the phone to receive the news they've always dreaded: that their loved one, who had sworn to protect and serve New Yorkers by joining @NYPDnews will not be coming home."