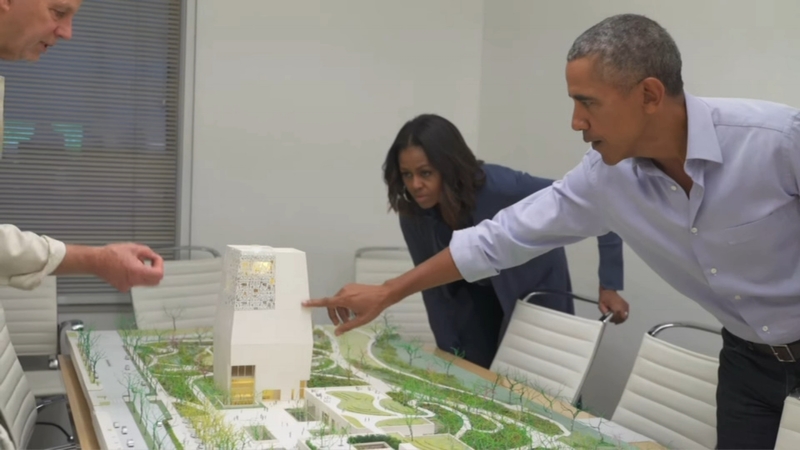 CHICAGO (WLS) -- Chicago's Plan Commission unanimously approved the blueprints for the Obama Presidential Center, despite protesters gathered outside and concerned citizens lined up to give comments.

Groups representing both sides of the issue were vocal Thursday. The demonstrations and chanting started around 5 a.m., five hours before the committee was scheduled to start reviewing zoning requests and other issues surrounding the $500 million project, before the plans are sent to City Council.

With the unanimous approval, the center has cleared its first hurdle to allow it to be constructed in Jackson Park.

The hearing began with a video from the Obama Foundation.

In it, he shared the plan that would erect three buildings, add trails and green space along with 2,500 jobs and $2 billion of economic investment on the South Side.

The center's architects and the foundation's leadership stressed that the project is not for profit, and is an opportunity to reinvest in the community.

More than 200 people signed up to comment at the hearing. Concerns included concerns about maintaining affordable housing and negative impacts on wildlife.

One group called for a guarantee from City Hall that they won't be pushed out of their neighborhood if the Obama library is built in Jackson Park.

Protesters gathered outside City Hall Thursday morning, hours before Chicago's plan commission was scheduled to review the blueprints for the Obama Presidential Center.

Obama Foundation supporters cheered on the proposed library, saying it would bring incredible job opportunities to the South Side and foster economic development there.

"I recognize that they have a concern. I think that like any family, we don't agree on everything and that we'll find a way to make sure their needs are met," said Ghiam Foreman, who supports the Obama Center.

Protesters want the City Plan Commission to hold off on making any decisions until protections for residents can be spelled out, like a property tax freeze and 30 percent affordable housing for new construction and rehab.

The Coalition for the Obama Presidential Center condemned the federal lawsuit that would block the library from being built.

The Coalition for the Obama Presidential Center condemned a federal lawsuit that would block the library from being built.

Protect Our Parks filed a lawsuit on Monday to block the construction of the library claiming the transfer of public park lands to a private entity violates Chicago Park District code.

The group held a news conference on the second floor Thursday morning, before the committee meeting started.

They said anyone who tries to stop the library needs to get out of the way. They also presented the plan commission with more than 5,000 signatures supporting the project.

"Why would you want to take away something that gives so much hope to black people? Why would you want to do that? It makes no sense, so it may be unintentional racism, but at the end of the line if we lose this thing and the library is not built, there will be hell to pay," said Leon Finney, founder of the Coalition for the Obama Presidential Center.

Some people were thrown out of the meeting Thursday morning, for protesting. More than 100 people signed up to speak, so the meeting is expected to last into the afternoon.