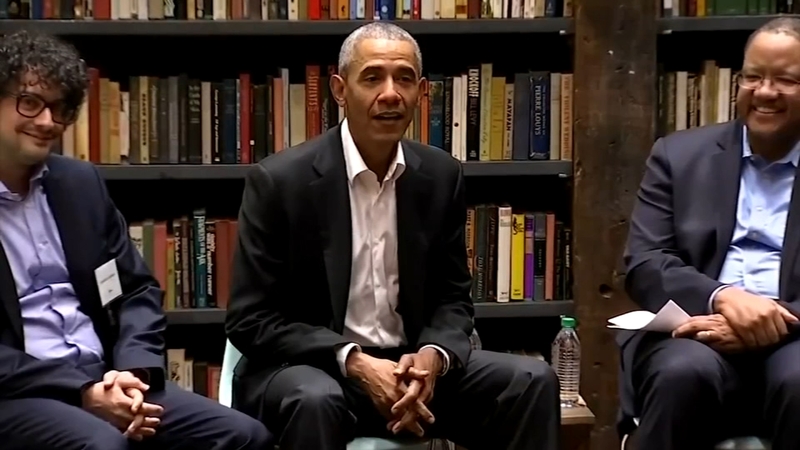 The group 20 people from around the globe met Obama at the Stony Island Arts Bank in the Woodlawn neighborhood.

"You could not find a more exciting group of young people," Barack Obama said Wednesday as he greeting the first class of Obama Foundation fellows.

"You could not find a more exciting group of young people than the folks right here. And I want to welcome you all to the South Side of Chicago," Obama said Wednesday.

He visited the group at about noon and Michelle Obama met with the group later.

The 20 fellows were picked from 20,000 applications. They are all working to improve their communities.

"The mission of the foundation is to inspire, empower and connect a generation of civic leaders," said David Simas, CEO of the Obama Foundation. "When you look at these 20, they personify and are the exemplar of the type of leaders that the president and Mrs. Obama were thinking about."

The fellows have been meeting all week. They were at Starved Rock since Sunday evening and they wrap up Thursday evening.

This is the first of four meetings of the fellows during their two-year fellowship.

After the Obamas left, three young men were taken into police custody outside the building as the fellows were loading onto a bus.

Ground isn't even broken to begin building the Obama Center, but just a few blocks away there's a hesitant welcome.

"We are for the Obama Center, we just don't want to get displaced," said Peru Brown of the Obama Community Benefit Coalition.

Standing on a vacant city-owned lot at 63rd and University, South Side residents are trying to get their former neighbor's attention before it's too late.

"Give us some kind of guarantee that we won't be displaced or priced completely out of the market," said Brenda Smith, Woodlawn resident.

"You are leaving us out. You are not involving us. You say you are, but you're not," said Michelle Williams of the STOP Organization.

They want in writing a guarantee that long-time residents won't get smacked with higher property taxes.

"We are pushing for a city ordinance that would set aside 30 percent of new and rehab housing for low income and working families," Brown said.

"They come in, build up, we have to move out and can't afford to come back because the rent and taxes all that stuff is too expensive," said Smith.