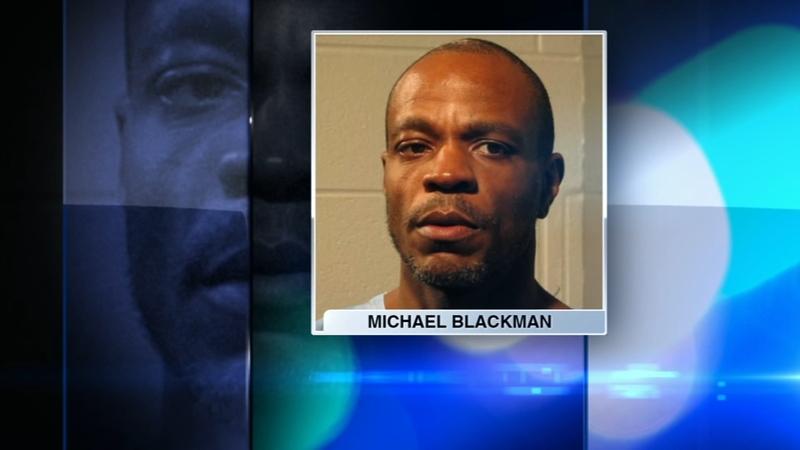 CHICAGO (WLS) -- A 40-year-old Chicago police officer is recovering at Christ Medical Center Sunday morning after he was shot while delivering a warrant Saturday, according to police.

The officer is a 16-year veteran of the Chicago police force and was hit multiple times, sources said.

Police identified 45-year-old Michael Blackman as the shooter. Blackman was shot multiple times during the exchange of gunfire with officers and is in critical condition also at Christ Medical Center, investigators said.

Witnesses describe a gun battle that ensued Saturday between Chicago police and a suspect wanted for shooting a woman in the Fulton River District.

Investigators say Blackman was initially wanted for shooting a 29-year-old woman while riding his bike in the Fulton River District on Wednesday.

Chicago police gave an update Saturday on the arrest of a suspect wanted for shooting an officer in West Englewood.

"The fugitive team went over there and they knocked on the door. The defendant came out the back door. That's when he shot the officer," said Chicago Police Deputy Chief Brendan Deenihan.

Police released photos of a gun they recovered at the scene.

Gun recovered from scene after armed confrontation with fugitive Michael Blackman. He's now in surgery listed in critical. He posed a clear and present danger to the people of Chicago & no word on his motivation as to why he shot a police officer and a victim earlier this week. pic.twitter.com/XkrmMBB0eB

Investigators haven't yet determined the reason behind the shooting that sparked the manhunt earlier this week.

"We do not have any additional motive," Deenihan said. "It appears that he randomly targeted and shot this poor woman."

Chicago Mayor Lori Lightfoot visited the officer at the hospital.

She also tweeted, commending the "quick and heroic work of Chicago police officers and our federal, state, and local law enforcement partners."

UPDATE: A suspect has been apprehended thanks to the quick and heroic work of @Chicago_Police officers and our federal, state, and local law enforcement partners. Today’s incident is a stark reminder of the sacrifices first responders make every day. https://t.co/0pzPUkUYak