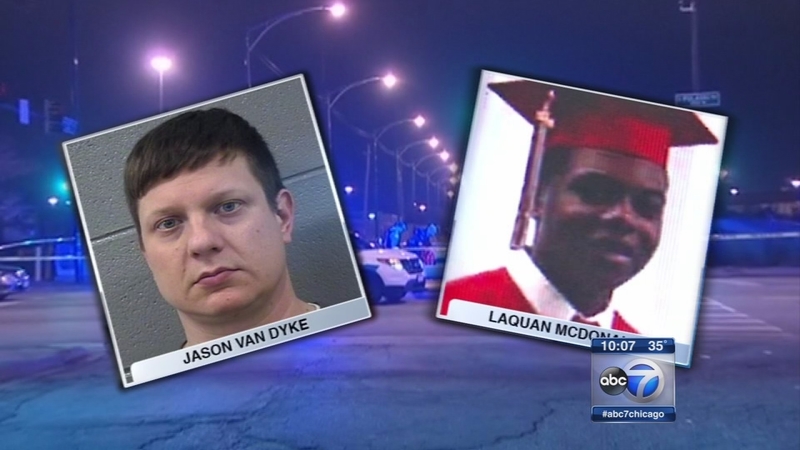 CHICAGO (WLS) -- Jason Van Dyke was stripped of his police powers right after the shooting of 17-year-old Laquan McDonald last year, but stayed on desk duty.

As soon as he was charged with murder, Van Dyke's police paycheck stopped.

When 37-year old Van Dyke walked into the Cook County Criminal Courthouse with his lawyer, it was the first time in more than 30 years that an active Chicago police officer had been charged with murder for an on-the-job shooting.

On Tuesday, a Cook County court ordered Van Dyke held without bond until judge Donald Panarese Jr. can view the video on Monday.

The city released the video to the public on Tuesday.

"We are concerned for the officer's safety; about his family. We are concerned about the other officers on the streets of Chicago," said Daniel Herbert, Van Dyke's attorney.

The husband and father of two grade school children has been a police officer for 14 years. He suited up for street duty during NATO protests in 2012, a high-profile assignment.

He was part of a special operations unit for several years, despite at least 18 citizen complaints against him since 2006, according to a University of Chicago database.

Allegations of brutality and improper racial comments, all of which were dismissed, but one resulted in a $350,000 federal court judgement.

"Van Dyke falls in line at least statistically with about 10 percent of Chicago police officers who have 10 or more misconduct complaints he is not unusual," said Alison Flowers, of the Police Data Project at the Invisible Institute.

Van Dyke sits in jail Tuesday night as his attorneys shore up a defense.

"They will likely have two options; lack of intent, this officer didn't intend to kill this suspect, didn't intend to cause him great bodily harm or, much more likely, that this officer was justified, legally justified in firing those shots," said Gil Soffer, an ABC7 legal analyst and a former federal prosecutor.

The last time Chicago police officers were charged with murder was 1980. Three officers arrested a man for smoking on an El train and fatally beat him.

The convictions were for a lesser charge, involuntary manslaughter. The judge said they had no criminal intent.