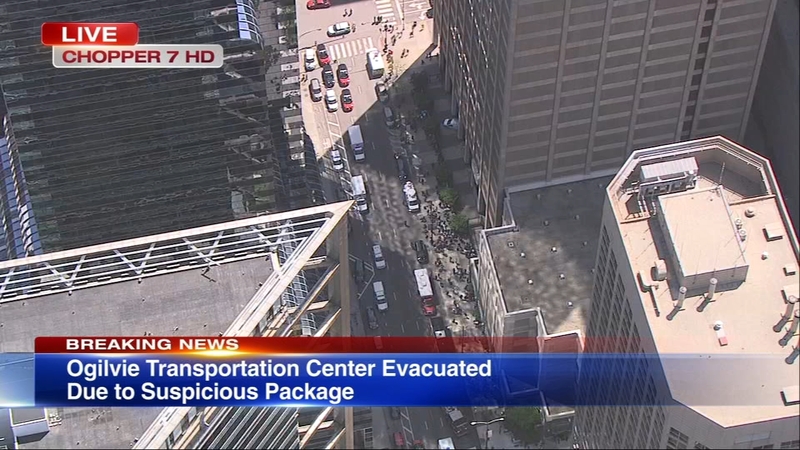 CHICAGO (WLS) -- More than two hours after suspicious luggage was left unattended Wednesday morning at Ogilvie train station, police gave the "all clear" and allowed people to return to the building shortly after noon.

Authorities were looking Wednesday afternoon for the male suspect who left the briefcase and a second bag next to a ticket agent on the second floor. The man said something to a female custodian, which sparked her to alert her supervisor. Police did not immediately disclose what was said.

Level 2 Hazmat at 500 W. Madison has been secured; items inside bags turned out to pose no threat. pic.twitter.com/B7wOTkNe1O

The CPD bomb squad and fire department determined that the bags were not a threat. A cellphone and other items were found inside, but police did not disclose what the other items were.

Metra trains were halted at Ogilvie Transportation Center for more than two hours as police investigated, but were operated with extensive delays Wednesday afternoon. The evening commute was not expected to be impacted.

The luggage was left at about 10 a.m., which is when police started to evacuate the station, located at 500 W. Madison in Chicago's West Loop neighborhood.

Commuters flooded out of the station, but people in the retail shops and offices in most of the 42-story building were told to shelter in place. Some people opted to take the stairs and leave the building.

Chicago police assisted Metra police with the investigation. Westbound Madison Street at North Canal Street is closed due to the incident.

Commuters were being evacuated Wednesday morning at Ogilvie Transportation Center.