How does plane de-icing work at O'Hare International Airport? 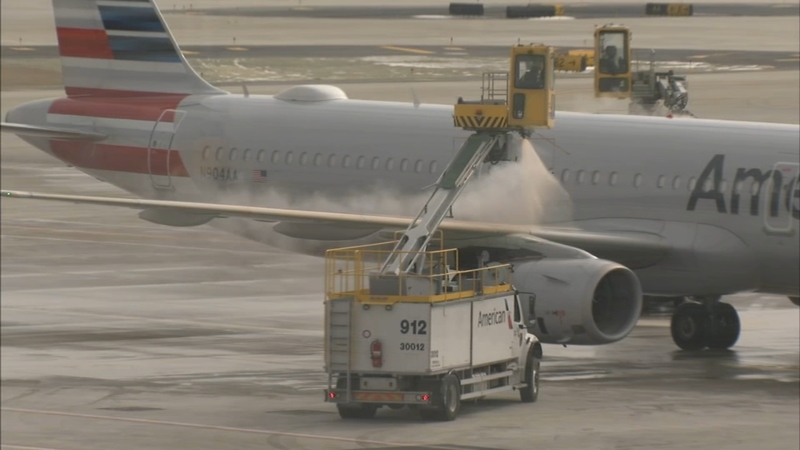 How does plane de-icing work?

CHICAGO (WLS) -- At one of America's busiest airports, keeping the planes flying is a challenge with national implications. Add some of the country's most challenging weather and you have to wonder - how does it all work?

ABC7 Eyewitness News got to go behind the barbed wire and see just how sophisticated plane de-icing really is, because without it nobody is heading south to escape the cold, or anywhere else.

Ice on planes "could shred an engine," said one man who knows.

"Those chunks of ice could actually get in the engine," said Gene Herrick, de-icing manager for American Airlines.

The 39-year airline veteran, who previously served in the US Air Force, knows Bernoulli's principle of lift can be defeated quickly by ice and knock planes out of the sky.

O'Hare International Airport's centralized deicing facility is located on the west side of the airfield. There, Herrick's team of mostly long-serving staff take planes thorough a rigorous regimen.

Million dollar trucks mix temperature-controlled ethylene glycol compounds to coat wings and flight surfaces. This process is more efficient at the facility than when completed at the gate.

George Vokl, a 35-year AA stalwart, is one of the de-icing truck operators. He said he sees passengers looking at him as he sprays the planes. Their faces remind him of his mission to keep them safe.

"The pilots take pictures of us spraying the nose of the cockpit more than you would think," he said. "They think our jobs are neat and we think their jobs are neat."

Herrick then takes us to a source of pride for the American fleet: A Boeing 787 in American Airlines livery headed for a Cancun Mexico in a half hour. It is one of 10,000 planes the airline deices in Chicago every year, a critical piece of aviation safety.

The National Transportation Safety Board estimates even a half inch of ice on a wing's leading edge can cause a catastrophe.