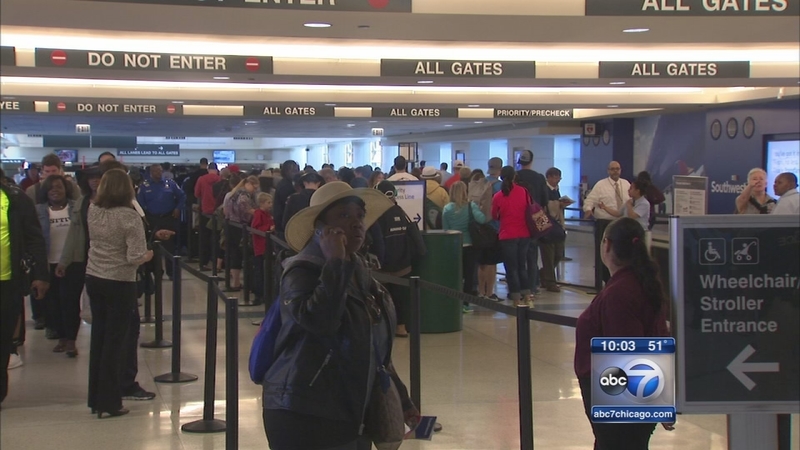 CHICAGO (WLS) -- From City Hall to Capitol Hill, there are calls for the TSA to clean up its act. Mayor Rahm Emanuel said Tuesday he has found resources to make 100 part-time security agents full-time, and Sen. Dick Durbin said additional screeners are on the way.

"They're on their way in the next several weeks. I can't give you a day," Durbin said.

While more screeners are on the way, Senator Mark Kirk said Tuesday afternoon if long lines are still the norm come Memorial Day, the TSA's administrator should resign.

TSA Administrator Peter Neffenger apologized after hundreds of passengers trying to fly out of O'Hare were stranded Sunday night because they couldn't get to the gate on time. Airport employees offered them cots to sleep on overnight.

The problems, though, weren't confined to Monday. For weeks, security lines at both of Chicago's airports have seesawed from smooth-sailing to two-hour ordeals. A viral video from Midway showed a line that stretched out of the terminal last week.

"We are the busiest aviation city in the country and there are inadequate resources. It's maddening and frustrating and predictable and could've been dealt with months ago," Emanuel said.

On Tuesday afternoon, the feds let the mayor announce that in the coming days, 100 TSA screeners will shift from part-time to full-time and an extra 58 screeners will be assigned to Chicago's airports in the next few weeks, with 250 more by mid-August.

Since 2013, the number of TSA officers has fallen by 5,000 agents while passenger volume has spiked over 8 percent, with 68 million more people traveling by air.

On Tuesday, the TSA Administrator seemed at a loss to explain why Chicago has it worse than the rest of the country.

"And for any of you here from Chicago, I just know that we've got a team out there right now trying to figure out what the root cause of that were. We are not seeing that kind of problem throughout the system. We have some other spikes in the system," Neffenger said.

Flyers are frustrated by the unpredictability of the security line wait times. On Tuesday, O'Hare's Twitter account warned of longer wait times and said the TSA recommends arriving three hours prior to a flight.

"I was in a conference and they told us security lines might be 2.5 to three hours, so they let us out early," said passenger Craig Gillman. "And I'm three hours early. No line."

"We had a significant challenge in Chicago yesterday. I don't know what that was. We're fixing that," Neffenger said.

The TSA has been trying to encourage more people to sign up for expedited screening. It comes with an $85 price tag. As of now, you can't make an appointment at the downtown office for at least 45 days. However, you can just show up, take a number, and wait.

TSA Administrator Neffenger said he plans to fly to Chicago on Friday to meet with his team on the ground to sort out the trouble.