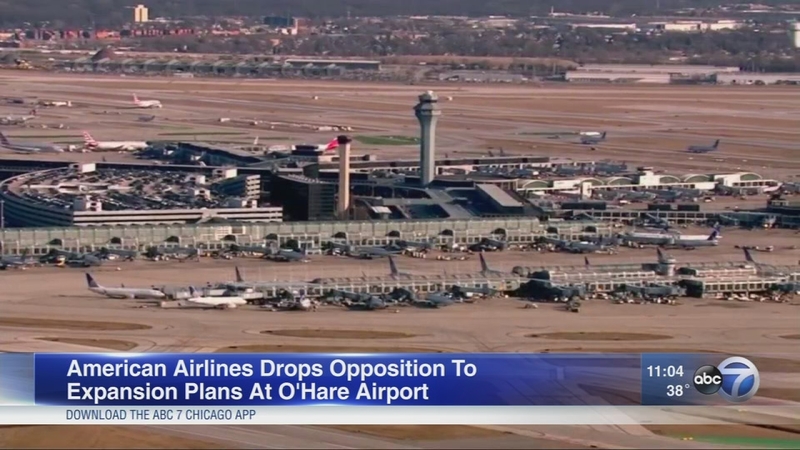 CHICAGO (WLS) -- Mayor Rahm Emanuel has agreed to a deal with American Airlines that could rescue the mayor's massive expansion plan for O'Hare. The plan would double the size of the airport.

The mayor struck a deal with American Airlines late Wednesday night to resolve a gate dispute that threatened to hold back his plans to expand O'Hare.

Prior to Wednesday's deal, American Airlines had issued a complaint, saying the mayor's original plan to expand O'Hare granted too many extra gates to United Airlines, giving United an unfair advantage.

Reports say Emanuel has since resolved the dispute by agreeing to speed up construction on three common-use gates that could be used by any airline, including American.

The $8.5 billion plan would dramatically transform the airport, and includes a state-of-the-art global terminal and dozens of new gates and concourses.

Under the plan, funding for the expansion would come from new lease agreements with American and United.

Some travelers at O'Hare are happy about the proposed renovations.

"Expansion is always good in my eyes as long as it's for the customers," said traveler Kwaku Domfe.

"I think with the new technology that's going to be implemented, flights and different routes are going to be vastly expanded and I think it will be easier for travelers to know where they are going," said traveler Perla Gomez.

In the deputy mayor's statement, the expansion plan is projected to create 60,000 new jobs during the eight-year construction and the airport is expected to service 100 million passengers by 2026.

American Airlines CEO Doug Parker said in a statement, "This landmark plan for a redeveloped O'Hare will transform the airport experience for travelers and allow American Airlines to continue to invest and grow in the city of Chicago. We are strongly supportive of this agreement because it is what is best for the city of Chicago, our 9,300 Chicago team members and our customers. Thank you to Mayor Emanuel for his commitment to ensuring Chicago is on the leading edge of airport innovation. The Mayor and his team worked tirelessly and creatively to structure an agreement that keeps competition thriving at O'Hare. We look forward to growing at O'Hare in the years to come."
Report a correction or typo
Related topics:
travelchicagoo'hareunited airlinesair travelamerican airlinesrahm emanuelconstructionohare airport
Copyright © 2022 WLS-TV. All Rights Reserved.
RELATED
American Airlines says it won't renew O'Hare lease
Mayor announces O'Hare expansion plans
TOP STORIES
Official admits police made 'wrong decision' in TX shooting
Shocking video shows gunmen firing dozens of shots near Cabrini Green
3 charged in Skokie murder, attempted murder of 2 young boys
South Side shooting at bus terminal could have been 'massacre': judge
Mother accused of killing daughter over 'taking her dad's side': cops
Timeline breaks down Uvalde school massacre
Texas survivor apologized to dad for blood on clothes, losing glasses
Show More
Chicago area officials urge use of masks over Memorial Day weekend
Illinois reports 5,659 new coronavirus cases, 8 deaths
Chicago man faces Capitol attack charges
CPD cop accused of falsely arresting woman cleaning up looted store
4th grader 'did what she had to to survive' Uvalde shooting, aunt says
More TOP STORIES News