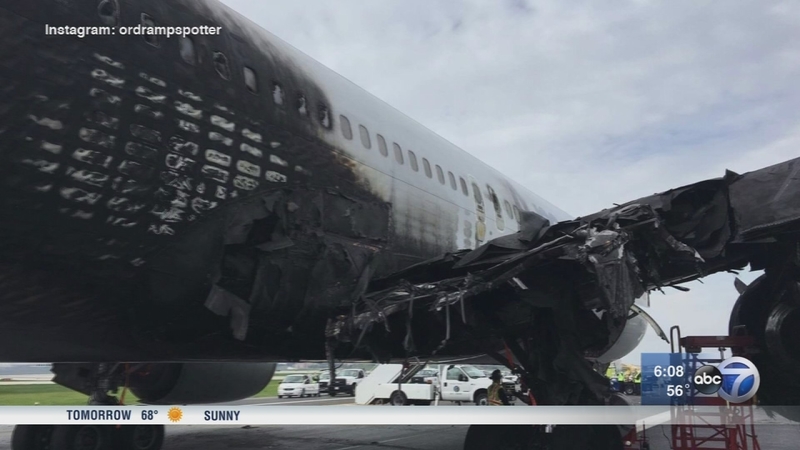 CHICAGO (WLS) -- It has been one week since American Airlines flight 383 dodged disaster while attempting to takeoff at O'Hare International Airport.

There were multiple fractures found in the right engine according to investigators from the National Transportation Safety Board (NTSB). Authorities described it as fatigue cracking in the turbine disk.

There is still no word on why the cracking occurred but a revelation raised questions about whether other planes are at risk.

Close-up pictures obtained by the ABC 7 I-Team show the damage to the right side of the Boeing 767 that occurred when the engine blew apart.

Federal authorities said the right engine high pressure turbine disk broke into at least four pieces and some of them flung sideways a few thousand feet away.

The takeoff direction of the jetliner marked on an aerial map provided by NTSB inspectors shows a gouge in the runway believed to be where the engine started rupturing. As the plane was rolling at 147 miles an hour, tire marks show where it started braking.

Then came the evacuation. As fire roared on the right side from fuel lines cut by the flying metal, 170 passengers and crew made it out alive, 21 of them suffered slight injuries.

The NTSB has identified at least three previous similar engine failures the past 16 years. But unless investigators determine a connection or some systemic problem in these engines, it is unlikely there would be an emergency order from the FAA.

PASSENGERS DESCRIBE THEIR EXPERIENCE ON THE PLANE