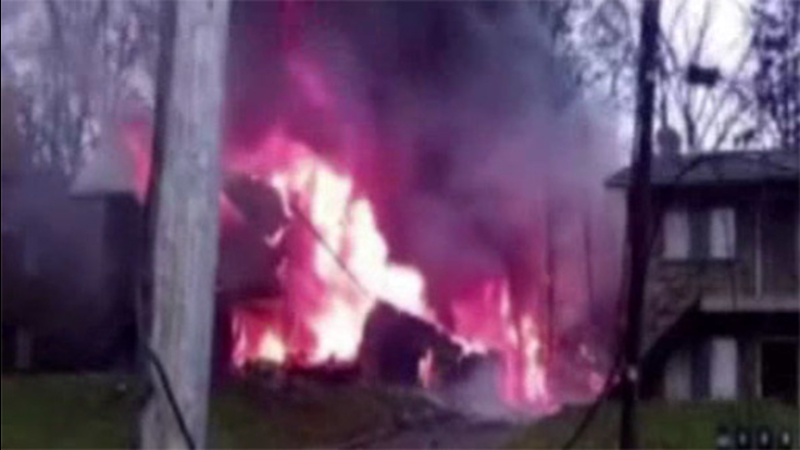 AKRON, Ohio -- Seven associates of a Florida real estate investment company were on the second day of a multicity Midwestern trip to look at property for potential shopping centers when their small jet crashed into an Ohio apartment house, killing all nine people onboard.

The crash Tuesday afternoon in Akron - 2 miles from the small airport where the plane was to land - killed two executives and five employees at Pebb Enterprises, a Boca Raton-based company that specializes in shopping centers. The two pilots also were killed.

Another pilot who had just landed at the airport reported hearing no distress calls despite being on the same communications frequency as the aircraft that went down, the National Transportation Safety Board said Wednesday.

The NTSB recovered the downed plane's cockpit voice recorder, which was being sent to a lab in Washington.

Investigators also reviewed surveillance video from a construction company that showed the plane coming in along the tops of trees and banking to the left before it crashed and exploded into flames and a cloud of black smoke, said Bella Dinh-Zarr, vice chairman of the NTSB.

The left wing hit the ground first before the plane crashed into the apartment house, she said.

Officials haven't released names of the victims, but family members at the crash scene said the dead included 50-year-old Diane Smoot, who was with the group from Pebb Enterprises, her sister told Cleveland.com.

"Our hearts are broken this morning with the news of the tragic accident that took the lives of two principals and five employees of Pebb Enterprises," said a statement posted Wednesday on the company website. "We are shocked and deeply saddened for the families, colleagues and friends of those who perished."

The chartered plane left Fort Lauderdale, Florida, on Monday and stopped in St. Paul, Minnesota; Moline, Illinois; and St. Louis before arriving in Cincinnati, according to the flight-tracking website FlightAware.

The plane departed from Cincinnati on Tuesday morning and stopped in Dayton before crashing on its approach to Akron Fulton International just before 3 p.m.

The 10-seat Hawker H25 business jet clipped utility wires and crashed into the four-unit apartment building, sparking a fire that destroyed the building, Ohio State Highway Patrol Lt. Bill Haymaker said. Nobody was home at any of the apartments, and there were no other injuries.

A man who lived in the unit that the plane crashed into said he wasn't home because he'd gone to the store to buy Hot Pockets, a brand of microwavable turnovers.

Jason Bartley told the Akron Beacon Journal that he feels lucky but also in shock over the crash. The 38-year-old factory worker said he was coming home when he saw the flames.

Investigators are trying to determine what caused the crash, which shook furniture in homes several blocks away and left behind fiery debris.

It could take days to recover and identify the victims, Haymaker said.

"It's going to be extensive," he said.

The Summit County coroner on Wednesday sought the expertise of a forensics team from Mercyhurst University in Erie, Pennsylvania, to help local officials at the site of the crash. The team specializes in crime scene and airplane crash recoveries of human remains.

Witnesses, including Carrie Willis, who lives several blocks away, said they heard explosions when the plane hit.

"I heard a big bang, and my couch shook twice," Willis said.

Roberta Porter, who lives about a block from the site, said she was driving home when she saw the plane crash and burst into flames.

"This plane just dropped out of the sky, veered and crashed into the apartment building," Porter said.

She said it's scary to think that if she had been driving faster the plane might have clipped her car.