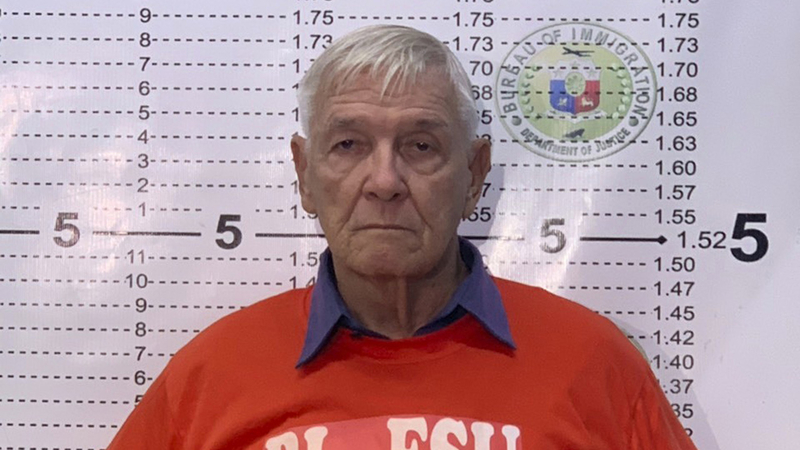 MANILA, Philippines -- Philippine immigration authorities say they have arrested an American Roman Catholic priest accused of sexually assaulting altar boys in a remote central town in a case one official described as "shocking and appalling."

Bureau of Immigration spokeswoman Dana Sandoval said Thursday the Rev. Kenneth Bernard Hendricks, who has been indicted in Ohio for alleged illicit sexual conduct in the Philippines, was arrested in a church in Naval town on the island province of Biliran.

Each count is punishable with up to 30 years in prison, said U.S. Attorney Benjamin Glassman said at a press conference in Cincinnati on Thursday morning.

Federal court records do not show an attorney for Hendricks who could comment on the charges.

An Ohio court had issued a warrant for the arrest of 77-year-old Hendricks, who has been living in the Philippines for 37 years, Sandoval said, adding that the U.S. criminal case stemmed from complaints from Filipino minors who were allegedly victimized in the Philippines.

There was no immediate reaction from the U.S. Embassy, Philippine Catholic church officials or Hendricks, who was flown to Manila and detained in an immigration cell.

The suspect allegedly abused victims who served mostly as altar boys in Naval, in 50 counts of molestation in his residence in a case that's "both shocking and appalling," Sandoval said.

"The victims were in his house and the abuses were committed while he was taking a bath with each of them," Sandoval said by telephone. U.S. authorities provided information about the alleged sexual assaults to the Philippine government, she said.

The victims were reportedly warned they would be locked up in jail if they told anyone about the abuses, she said.

"It's horrifying ... abusive conduct," Glassman said. "It's grooming children -- young children -- that are interested in being involved in church activities and taking those kids and sexually abusing them."

Glassman said 10 victims have come forward with their statements. Of the five interviewed, the youngest was 7 years old at the start of the abuse.

The U.S. Embassy may revoke Hendrick's passport to help Philippine authorities immediately deport the priest, the immigration bureau said in a statement.

Hendricks is "a fugitive from justice that poses a risk to public safety and security," Sandoval said. "We will not allow sexual predators to prey on our children. People like him must be kicked out and banned from the Philippines."

Glassman said that he wants to prosecute the case in Ohio, but his office is still coordinating with Philippine officials to determine which jurisdiction will proceed first.

He added there's reason to believe others have been abused by Hendricks, whose travel records show he returns to the U.S. for several months each year. Glassman said Hendricks has a residence in the Cincinnati area, but could not comment on whether he served as a local priest there.

Steve Francis, special agent in charge of Homeland Security Investigations in Michigan and Ohio, pleaded with other victims to come forward. He said the allegations against a man he described as "in one of the highest position of public trust" were very disturbing.

Philippine President Rodrigo Duterte has repeatedly lashed out at the dominant Catholic church and its priests over such abuses, saying he himself along with other students were sexually molested by an American priest in their high school days.

In separate speeches Wednesday, the volatile leader claimed almost 90 percent of Catholic priests were homosexual and also admonished Catholics to "kill your bishops, they are useless fools. All they do is criticize."

"I'm telling you, the most hypocritical institution in the entire Philippines is the Catholic church and the pope knows that," Duterte said.

A Catholic priest and Duterte critic, Amado Picardal, said the president's remarks on the church may be aimed at diverting public attention from his widely criticized deadly war on drugs, the government's failure to stop the smuggling of illegal drugs into the country, continuing poverty, corruption and other issues.

He said Duterte may also feel threatened by the Catholic church, which played a role in the ouster of two Philippine presidents, including the 1986 overthrow of dictator Ferdinand Marcos.

"Many people believe that his controversial statements are simply a way of diverting the people's attention from the real issues raised against him," Picardal said.