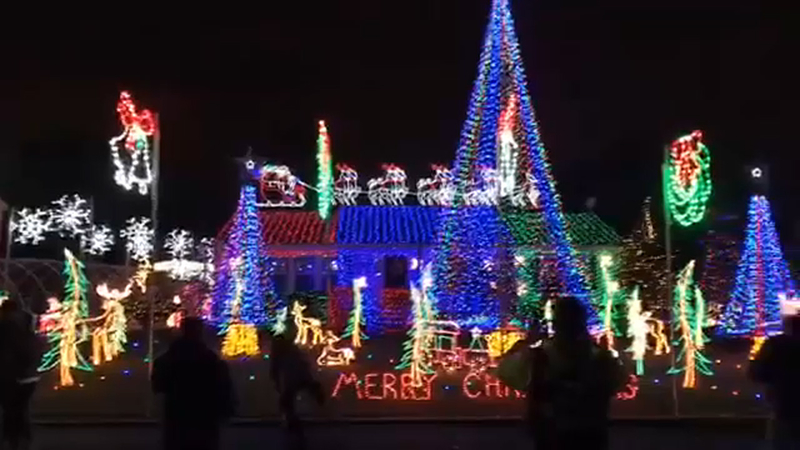 OLD BRIDGE, N.J. -- A New Jersey town is threatening to shut down a family's famed holiday light display that has drawn a lot of attention over the past 15 years, and not all of it good.

The town has told Apruzzi and his wife Kris they will have to pay $2,000 a night for security, or the town will shut them down.

Old Bridge police confirm they have received complaints on the holiday display at 18 Central Avenue. The complaints have been about congestion and traffic in the area.

Last year, Old Bridge police received many complaints, mostly regarding traffic congestion, about the holiday display at 18 Central Avenue. As a result, the police set up extra detail on the block to help manage the traffic. Now, they want the Apurzzis to pick up the tab.

The Apruzzis have been putting on the display at their home for 15 years, which includes more than 70,000 lights synchronized to music.

Town officials say the increasing crowds and parked cars have led to unsafe conditions in the area.

Tom Apruzzi calls the fees "bureaucratic baloney" and a First Amendment issue, and he has started an online fundraiser to pay them. But he says the show will go on starting Saturday, whether or not the fundraiser meets its goal.

"If they want to stay in their house and be unhappy and not come out to see a beautiful display like this, pity them," Tom told Eyewitness News last year. "Bringing 28 days of a little traffic to the neighborhood, this is what I have to deal with 12 months out of the year."

The set up for the elaborate display generally begins in September, and the Apruzzi family estimates they've invested nearly $100,000. The light show happens every 30 minutes, free of charge, and runs each night from 5:30 p.m. until 10 p.m.