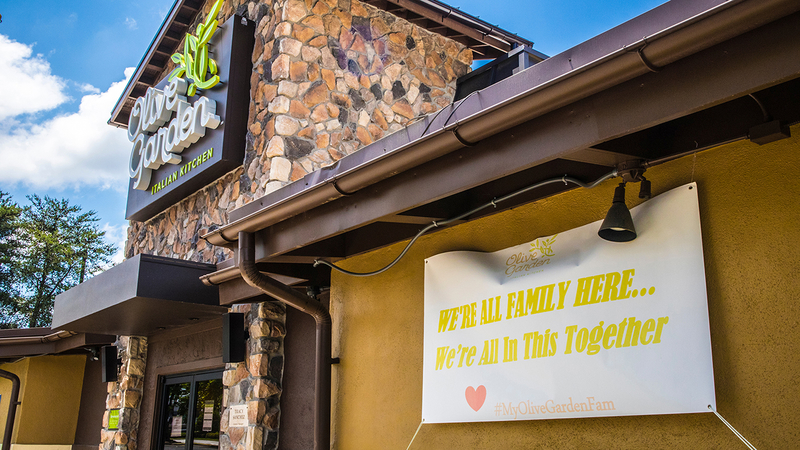 Olive Garden is raising its wages

The company that owns Olive Garden is raising wages in a bid to attract workers. But the move doesn't go far enough to satisfy critics of a practice common in the restaurant industry.

Currently at Darden Restaurants, which owns Longhorn Steakhouse, Cheddar's Scratch Kitchen and other chains in addition to Olive Garden, all employees are entitled to at least the federal minimum wage of $7.25 or state minimum wage.

But not all of their wages have to come from the company. In many states, employers pay tipped workers a sub-minimum wage floor, which amounts to $2.13 at the federal level and is higher in some states. Customers pay the rest in tips. If those tips don't bring employees up to the minimum wage, companies like Darden are required to make up the difference.

Darden said Thursday that starting next week, hourly restaurant employees will earn at least $10 an hour, including tips, instead of the federal minimum wage or state minimum wage. The company is planning to raise that floor to $11 per hour in January 2022, and $12 an hour in January 2023. The change will impact about 20% of hourly workers, according to the company.

The move comes at a time when Darden is trying to attract workers.

"Our greatest challenge right now is staffing," Darden CEO Eugene Lee said on a call with analysts. Before the pandemic, Darden had about 165,000 active hourly employees, he said, but as of few weeks ago that number was down to about 115,000. As pandemic restrictions lift and people become comfortable dining out again, Darden hopes customers will start coming back to its restaurants. Staffing up is "our number one priority right now," Lee said.

Women always earned less than men. At current rates, the World Economic Forum says it will take more than 250 years to close the gender pay gap. Here's a look at why.

Critics say that the practice puts workers, particularly women and people of color, at risk because employees who rely on customers for their income can't push back when customers harass them. Their pay could also be impacted by customer biases, or slow shifts.

A recent report by One Fair Wage, which advocates for the elimination of the sub-minimum wage, discussed the results of a January survey of about 500 women aged 31 and older who are current and former restaurant workers. The survey found that compared to non-tipped female workers, a higher percentage of female tipped restaurant employees reported at least one sexual harassment experience.

"If Darden were serious about making sure their employees were paid enough money to live on they would raise the minimum wage to $15 per hour, and give the employees their tips on top of that pay," said Saru Jayaraman, president of One Fair Wage, in an emailed statement. She dismissed Darden's move as a stunt.

Darden didn't comment when asked about Jayaraman's specific criticism. Instead, a spokesperson pointed CNN Business to Lee's comments on the call, where the CEO told analysts that the wage increases, along with a roughly $200 million investment in employee benefits during the pandemic, "further strengthen our industry-leading employment proposition."

Proponents of the tipped wage say that tipped workers ultimately earn more than the minimum wage. Lee said on the analyst call that Darden's hourly employees earn on average more than $17 an hour. And when you look at hourly workers who earn tips, he added, that average rises to more than $20 an hour.