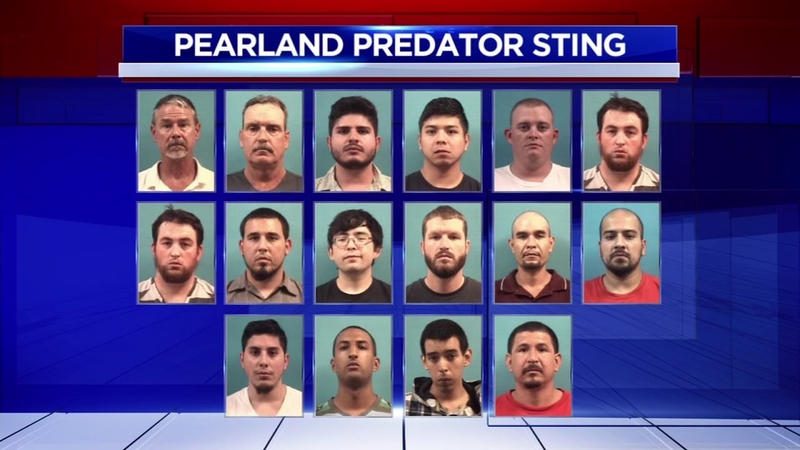 PEARLAND, Texas -- The Pearland Police Department recently conducted an online sting, called operation "Back to School," in an effort to crack down on sexual predators targeting kids online. Sixteen men -- ranging in age from 20 to 58 -- were arrested as a result of the sting.

In this type of crime, suspects use various websites to get in touch with children and then attempt to lure them to meet up for sexual activity. During "Back to School," investigators posed as minors, both boys and girls while online and identified suspects who were trying to meet children for sex. When the suspects arrived for a sexual rendezvous with the minor child at an apartment in Pearland, they were met instead by officers of the Pearland Police Department, who arrested them.

Police tell Eyewitness News among those men arrested is a physician's assistant, Jeffrey Brasfield, of San Antonio, who was in town for a conference, but had more on his mind than work.

Investigators gave few details on the investigations, saying they wanted to protect their methods for future operations. However, they did disclose that they met the suspects online via popular online websites and chat apps.

The 16 suspects were arrested and charged with online solicitation of a minor - 2nd degree felony. If convicted, the penalty for a second degree penalty is 2 to 20 years in prison and a fine of up to $10,000. All were transported to the Pearland Police Department detention facility and will face charges in Brazoria County.
Related topics:
texasinternet sex crimesmolestationsex crimeu.s. & worldchild sex assaultpolice
Copyright © 2022 KTRK-TV. All Rights Reserved.
TOP STORIES
Maryland man dies with more than 100 venomous snakes in his house
Laundrie claimed responsibility for Petito's death in notebook: FBI
Illinois reports 40,642 new COVID cases, 137 deaths
Retired CPD officer, 57, killed in Edison Park hit-and-run
'So much deceit': Brother of Lori Vallow speaks out on family divide
Nick Jonas, Priyanka Chopra welcome their 1st child
1 killed in Will Co. semi crash; car wedged under back of trailer
Show More
Chicago's top doctor says end to COVID-19 mandates 'in our future'
Ford recalls 200K cars because brake lights can stay on
Ring camera captures fiery I-80 semi crash that injured 2
1 killed, 1 critically injured in Hampshire facility explosion
'Wheel of Fortune' contestant gets her Audi after bonus round pause
More TOP STORIES News