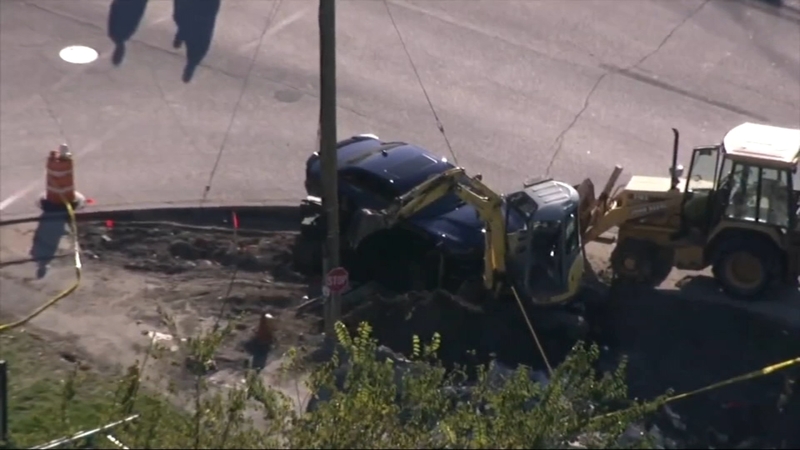 OAK FOREST, Ill. (WLS) -- Police in the southwest suburbs are searching for a man behind a crime spree that left a police officer and a construction worker injured.

"A friend of mine needed to use my car to pick up his mom," said Mark Wallin.

Was supposed to meet up with his co-worker to pick up his car. It didn't pan out quite like he expected.

"I go 'Where's my car?' He says, hey man I got some bad news, I was carjacked at gunpoint," Wallin said.

By the time Wallin pulled in at the Patio, police were already there.

"I could hear on the police radio, 'Car involved in an accident at 159th and Cicero,'" he recalled.

Police said as the fleeing driver tried to turn north on Cicero, he ran down a construction worker.

Witnesses said the worker tried desperately to duck the speeding Dodge Charger, throwing his hands up as a warning, but it was too late.

With Waller's Dodge Charger now mangled at Cicero, police said the driver bailed out and ran, with Oak Forest police officers on his heels.

Police said just minutes later the suspect stole another car, pulling a driver from a Mazda at gunpoint.

As the Oak Forest police officer tried to arrest him, the driver ran down the officer, who then fired at the fleeing car, police said.

The last anyone saw the speeding stolen Mazda was as it disappeared, passing Pulaski on 159th Street headed east.

The construction worker was taken to Christ Advocate Hospital where his condition is stable, police said.

The Oak Forest officer was taken to Palos Health and treated for injuries to a lower extremity and his arm, and released.