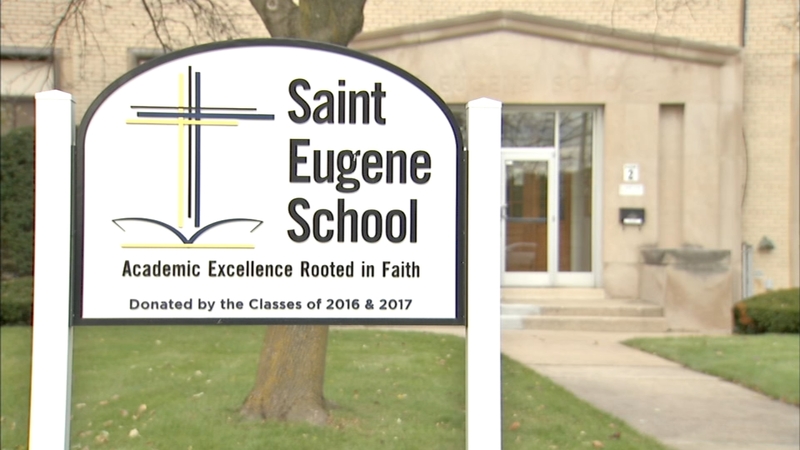 CHICAGO (WLS) -- Parents are scrambling to save their beloved St. Eugene School on Chicago's Northwest Side after the parish pastor and school principal allegedly made sudden demands to the school advisory committee Monday.

Committee co-president Christine Coleman said the group was told, in the presence of some teachers, to raise $250,000, in addition to the remaining balance of an initial school year goal of $150,000 ($318,000 in total). The committee was also allegedly told to secure enrollment of 189 students for next school year.

Coleman told ABC 7 that the pastor and principal said if those goals aren't met by January 31, 2020, St. Eugene School would close at the end of this school year.

"I told my daughters that I would fight," Coleman said Wednesday as she and a group of fellow parents mounted an effort to save the school.

"This school is the center of everything around here and it's really sad what they're doing," added AJ Acierno, a parent of three current students. Acierno said he and others have a plan in mind, but he wants to talk with the archdiocese before taking action.

Coleman has two children currently enrolled at St. Eugene. She said the school having financial problems in and of itself isn't a surprise.

"What they're telling us is, 'Hey, we're going to close the school.' They're giving us a situation that is an insurmountable amount to get to," Acierno said.

"How do you do that to families that want to invest in a Catholic education?" Coleman asked.

Coleman said she was open to a merger with another school. She said that option was taken off the table.

Facing the possibility their kids may need to switch schools, Coleman and Acierno worry there may not be space in nearby parochial classrooms.
"To start shutting down schools and not having a plan for these students and the community is really, really crazy," said Acierno.

The Archdiocese of Chicago declined an on-camera interview but sent the following statement to ABC 7: