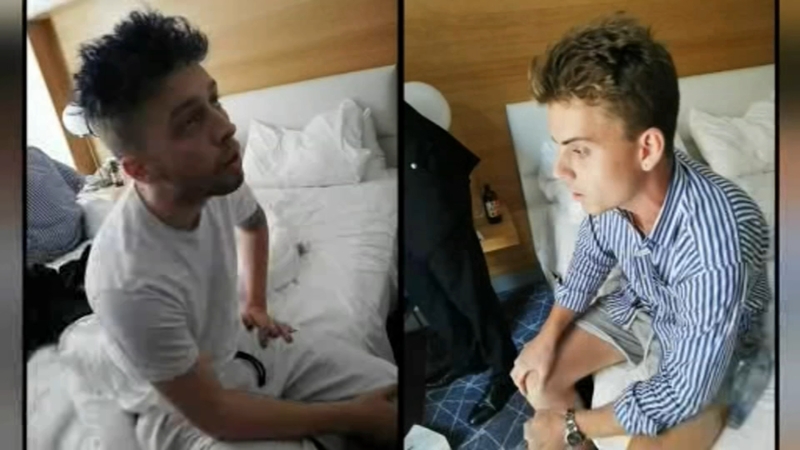 SAN FRANCISCO -- The lawyer for the family of one of two California college students who received life in prison sentences for the stabbing death of an Italian police officer reacted to the verdict on Thursday.

"It's bewildering," said Craig Peters, 21-year-old Finnegan Elder's family attorney. " They gave him and they gave Gabe a sentence that is befitting a mafia boss who wantonly kills innocent people. How could these boys possibly be in that same league?"

ABC7 I-Team's Dan Noyes reveals what led up to that night in July 2019 when an Italian police officer was killed. Find out in the ABC7 Original, "32 Seconds: A Deadly Night in Rome."

Elder and his friend, 20-year-old Gabriel Natale Hjorth, both from the Bay Area, received Italy's harshest sentence for their crimes.

On a July night in Rome, back in 2019, they were on a street corner to meet someone associated with a drug dealer. But, two police officers in plain clothes approached. In a struggle, Officer Mario Cerciello Rega pinned Elder to the ground; the young man stabbed the officer to death.

An appeal of the verdict is in the works, and the Elder family's attorney points out how different the process is in Italy.

"In America, the end of that first trial is, most of the time, the end of the road. But in Italy, it's very different. So we're trying to remind him that there is a whole other trial, essentially, that's going to happen at the appellate level, where hopefully we will have more sophisticated, more experienced, more reasonable and rational judges who will actually do the hard work of trying to make sense of all this and then fairly apportion justice," Peters said.

The deadly altercation lasted just 32 seconds in July 2019. On Wednesday afternoon in a courtroom in Rome, the two college students received life in prison.

The verdict came after 11 p.m. Rome time; it took the panel just a day to decide. A long ordeal is over for the victim's widow, but the defendants' lawyers and their parents pledge to appeal.

Twenty-one-year-old Finnegan Elder of San Francisco learned to speak Italian during his 22 months in a Rome prison. And you could see it on his face as he realized the verdict - guilty of the murder of Deputy Brigadier Mario Cerciello Rega - and his sentence, life in prison.

Officer Cerciello Rega's widow, who had just married the officer the month before his death, burst into tears, hugging her lawyers and her husband's partner, who was there during the deadly altercation.

In newly-released video, Varriale insisted he and Cerciello Rega identified themselves as police as they approached the Americans at 3 in the morning.

Elder and Natale-Hjorth thought they were meeting a drug dealer's contact, so they could return the backpack they stole after a drug deal went bad.

But Elder insisted neither officer identified themselves that night; they were in plain clothes with no weapons, badges or handcuffs.

Elder testified on March 1, "In the blink of an eye, they turned around and rushed us without saying a single word."

Cerciello Rega pinned Elder to the ground, and the young man stabbed the officer 11 times with a combat-style knife.

Elder told the court on March 1, "I'm truly sorry and deeply saddened for the loss of Mr. Cerciello."

The I-Team's Dan Noyes received a statement from the Natale-Hjorth's parents Thursday:

"Our family is astounded that Gabriel was convicted, without a shred of evidence against him, of a crime he did not commit. We can only hope that the appeals court will make its decision based on the facts, as opposed to the prosecution's unfounded arguments, and therefore recognize Gabriel's innocence."

On the record: I am confounded by this verdict that lacks both reason and compassion. It lays all the blame with two young boys, while holding blameless the Carabinieri who failed to follow basic police procedures which, had they been followed, would have Cerciello Rega with us here today. This verdict makes a mockery of justice by believing an incoherent story professed by an admitted liar, and then compensating that liar with an award of 50,000, while subjecting these boys to a sentence that is reserved for unredeemable, career criminals that commit premeditated killings.

The message sent by these judges is loud and clear. Those in a position of power, the Carabinieri and the prosecutors, can lie and mislead and they will not be held responsible. Those accused can tell the truth and acknowledge their own part in wrongdoing, and they will not receive credit for doing so. This is a sad day for holding those in positions of power accountable. This is a sad day for justice. I look forward to having the appellate court, with experienced, rational judges, objectively review the facts to determine a just outcome in this case for these two young boys.
Report a correction or typo
Related topics:
san franciscopolice officer killedtrialcrimecourtdocumentarycourt caseromei teamstabbingmario cerciello rega
Copyright © 2021 KGO-TV. All Rights Reserved.
TOP STORIES
Chicago police wrong raid victim says mayor 'betrayed' her
Oak Park elderly couple mistaken for bank robbers sue US Bank
Englewood mass shooting victims' families mourn; investigation continues
ITT Tech student debt will be wiped out by US Dept. of Education
Woman stabbing people randomly on North Side: police
Girl, 16, hit by bulldozer in Little Village
Unusual email leads to billionaire donating millions to Chicago museum
Show More
Congress approves bill to make Juneteenth a federal holiday
More than 1 billion CVS data records accidentally exposed, researcher says
Man charged with sexually assaulting teen on bike path
Tenenbaum Hardware in Lakeview closing after 98 years
33 migrants found packed inside moving truck in west Texas
More TOP STORIES News