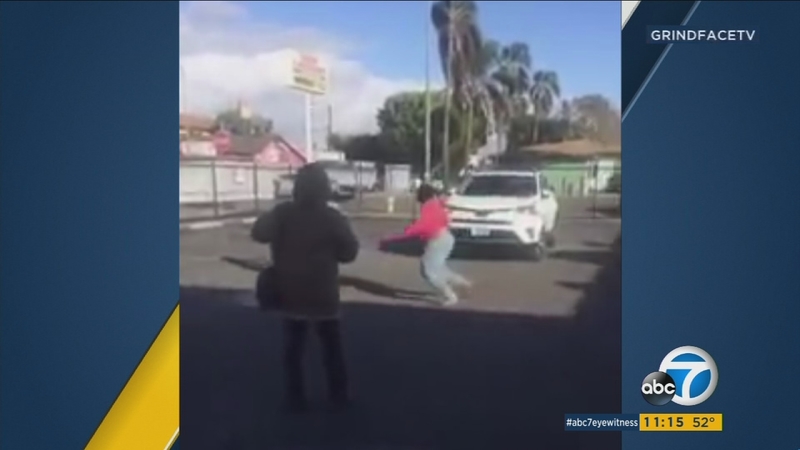 LOS ANGELES -- Two women spoke publicly for the first time Tuesday after being caught on video in a demolition derby-style fight in a South Los Angeles parking lot.

The video has been viewed by millions, and it shows two cars colliding several times as well as two women fighting one another.

"It's something you'd seen on movies. I never thought that I would be somewhere so close to being hit and killed like that. I am so shocked and just hurt," Colvin said.

Shabazz said it all started when Colvin rear-ended her, following a left turn. She said she pulled over to the right and that's when Colvin jumped out, spitting on Shabazz's car.

"It's really devastating. You know, I was really fearful for my life at the time," Shabazz said.

But Colvin said she did not read-end Shabazz's white SUV.

"Every lane I would get in, she would jump in front of me, cutting me off. Then we got into the turning lane, instead of her turning into her lane, she got into my lane," she said.

She added that she pulled up next to Shabazz, who got aggressive and spat into Colvin's car.

Cellphone video shows a fight between Shabazzz and a woman Colvin identified as her passenger. They both are seen taking swings at each other. Then a woman in red hits a car window with what appears to be a hammer.

She later runs out of the way when it appears Shabazz steps on the gas.

Both drivers said they talked to police. Colvin said she wants to take it as far as she can, including having charges filed against Shabazz. Shabazz said the whole ordeal was "uncalled for."