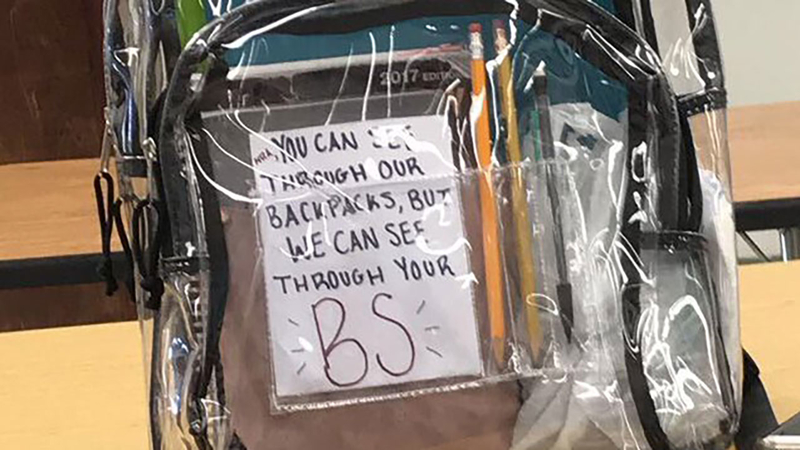 PARKLAND, Fla. -- Students at Marjory Stoneman Douglas High School are not happy about the clear backpacks they've been issued as a safety measure, decrying them as a temporary fix to a larger issue and bemoaning their sudden loss of privacy.

Officials issued the backpacks to 3,200 students on Monday, nearly two months after a shooting rampage on campus that left 17 students and faculty members dead, in an effort to prevent weapons from being brought onto campus. Investigators say the shooting suspect, Nikolas Cruz, was carrying a black duffel bag and a backpack as he snuck an AR-15 onto campus shortly before dismissal on Feb. 14.

"As much as I appreciate the effort, we as a country need to focus on the real issue instead of turning our schools into prisons," student Lauren Hogg wrote on Twitter after calling the backpacks "almost as transparent as the NRA's agenda."

Other frustrated students are now using the backpacks themselves as a canvas upon which to express their dissatisfaction.

Several students have adorned their clear backpacks with $1.05 pricetags, a reference to the amount of money they say Florida Sen. Marco Rubio has accepted from the NRA divided by the number of students in the state. Students have co-opted that figure as their worth in Rubio's eyes, noting that the clear backpacks themselves are "probably worth more than my life."

This backpack is probably worth more than my life #trends #NeverAgain pic.twitter.com/sVAfRbt12R

Many students have added March for Our Lives patches to their backpacks, as well as "We call B.S." pins and "Protect students, not guns" signs.

Dismayed at the lack of privacy afforded by the clear bags, one student noted that tampons are all a search of her backpack would yield. Male student Cameron Kasky filled his clear backpack with feminine hygiene products and called for expanded access to health products on Twitter.

Others have questioned whether or not the clear bags actually do anything to protect them from gun violence, urging officials to address what they view as the root of the problem: lax gun laws.

"If we're not going to do anything about our lax gun laws, then my son needs a bulletproof backpack, not a clear one," one student's mother wrote on Twitter with a photo of her son wearing his clear backpack.

Amid the criticism, Michigan firearms manufacturer Pantheon Arms took to social media to show how an AR-15 could, in fact, be disassembled and transported in a small backpack.

Yes, you can carry an #ar15 covertly in a #backpack, except in #clearbackpacks. #EnoughIsEnough #NeverAgain #MarchForOurLives #MSDStrong pic.twitter.com/JR2mEp0pB3

The clear backpacks are just one of a number of security measures instituted since the shooting. Access to school buildings has been severely restricted, and the district will soon issue metal-detecting wands to officers at the school, according to the Associated Press. Sports bags and instrument cases are also being searched upon entry to the campus.

In a memo to parents, Stoneman Douglas principal Ty Thompson pledged to "balance both convenience/privacy with safety/security" while implementing the new security measures.