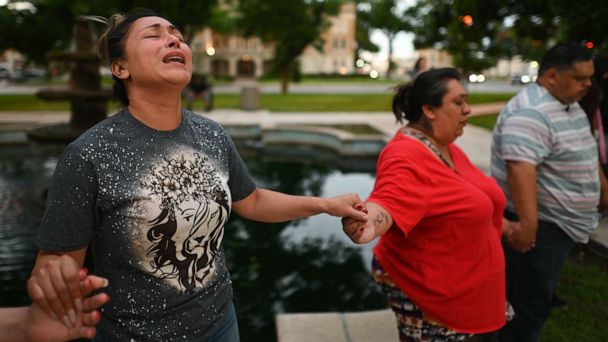 On Feb. 14, 2018, Sari Kaufman was a 15 year old high school student at Marjory Stoneman Douglas High School in Parkland, Florida, when a gunman opened fire and killed 17 people, a majority of whom were her fellow classmates.

Four years later, she says she continues to relive her trauma through the growing number of others like her who are personally affected by gun violence. Most recently, the mass shooting at an elementary school in Uvalde, Texas, when authorities say an 18-year-old high school student opened fire and killed at least 21 people, including 19 children.


"It's just really upsetting, especially to see young students, elementary-aged students, have to go through what I went through," said Kaufman on the Start Here podcast. "And I know from a personal level how difficult it is to deal with that trauma."

Kaufman said that not only will these children grieve the loss of their classmates and teachers today, but will wake up for the rest of their life with the belief that they can be murdered while at school.

"It forces you to become an adult before you need to be and it takes away your innocence to know that you go to school and that there's a possibility," said Kaufman.

Over the past five years, there have been 94,057 deaths and 183,926 injuries due to gun violence in the United States, according to a Gun Violence Tracker a part of ABC News' multimedia series "Rethinking Gun Violence," which partnered with the independent, nonprofit Gun Violence Archive.

As a growing number of American students have been affected by active school shooters, parents who have lost their children to gun violence will have to continue to live without their child.


Nelba Marquez-Greene lost her six-year-old daughter Ana Grace in the Sandy Hook Elementary School shooting in 2012. Now, she is watching other parents go through the same thing she went through nearly a decade later.

"Right now, the families are surviving, but I would say to anyone who wants to help, if you really want to help a family, find out ways to help them directly," said Marquez-Green on "The View." "Show up now. Show up 10, 15, 20 years from now. We will need you for a lifetime."

Marquez-Green said there is more work to be done than just sending thoughts and prayers to the suffering community.

"We must not be unserious in our faith. Thoughts and prayers, faith without work is dead," she said.

Marquez-Green also urged the country to force change from the lawmakers.