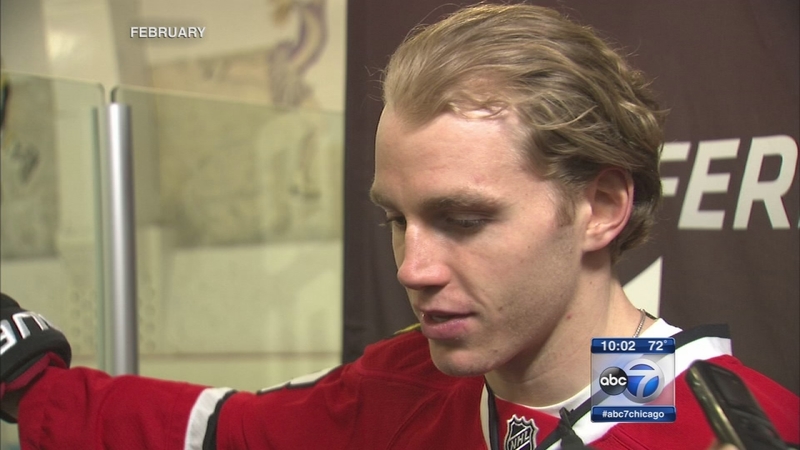 CHICAGO and HAMBURG, N.Y. (WLS) -- Chicago Blackhawks star Patrick Kane is reportedly the subject of a rape investigation in Hamburg, New York. Kane lives in Hamburg, near Buffalo, during the off season.

The Buffalo News reports two law enforcement sources said a woman has accused him of sexual assault late Saturday into Sunday. She reportedly went to the hospital, where a rape kit was performed.

Kane has not been arrested or charged.

"My experience over all the years is that a big percentage of these cases first of all turn out not to be true," Chicago Kent Law Professor Eldon Ham said. "The key is to not jump to conclusions. We don't even know if there are going to be charges."

The NHL is aware of the police investigation, and the Blackhawks have responded with the following statement: "We are aware of the matter and are in the process of gathering information. It would be inappropriate to comment further at this time."

Kane's agent released a similar statement late Thursday afternoon: "As the Blackhawks indicated in their statement, they are gathering information and will be reviewing reports. It would not be appropriate to provide further comment at this time."

Kane's success has come with setbacks, and this is not his first brush with the law. In 2009, he clashed with a taxi driver in Buffalo, New York, over the fare.

"He went berserk over this 20 cents and he started choking me and punching me, punching me like crazy," cab driver Jan Radecki said.

Kane, who was 20 at the time, pleaded guilty to non-criminal disorderly conduct and was ordered to apologize to the cabbie.

"I've caused a lot of pain for my family, my hometown of Buffalo, the city of Chicago, the Chicago Blackhawks, and obviously the great fans we have here in Chicago," Kane said in 2009.

Many chalked it up to a youthful indiscretion, and in recent years, he's been praised for changing his once hard-partying image. Kane helped lead the Blackhawks to Stanley Cup wins in 2010, 2013 and 2015. He signed an $84 million contract last summer that goes into effect during the 2015-2016 season.

At the Blackhawks' 2015 championship rally, he said, "I know you said I've been growing up, but watch out for me the next week."

Like Chicago, Patrick Kane is known as a hockey superstar in Hamburg, N.Y., where he purchased a $2.5 million lakefront home a few years ago. Kane's neighbors in Hamburg said police were at his home on Sunday.

Kane's parents still live nearby in South Buffalo, where residents said they will give him the benefit of the doubt for now.

"He's a hero here and we want to keep it away. I mean these charges are upsetting, but obviously nothing has been proven," said Sharon Burke, a South Buffalo resident.

"I don't think anything should be said until he's charged. And if he's charged, we should just go from there," said Joan Clark, a South Buffalo resident.