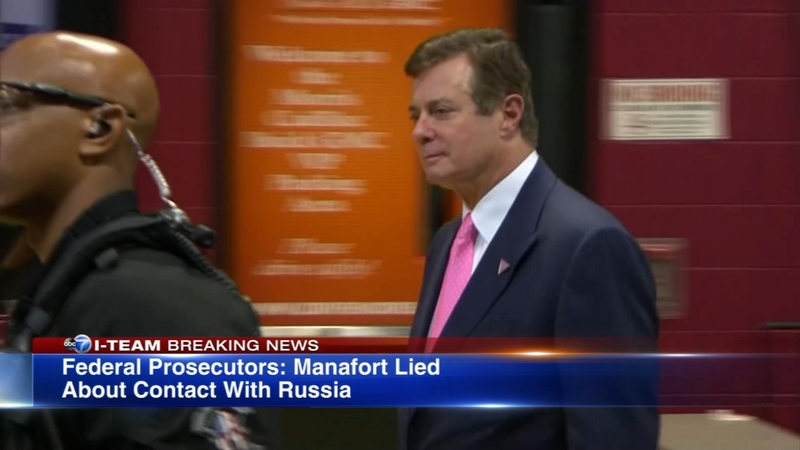 The rise and fall of President Trump's former confidante and campaign manager Paul Manafort late Friday took another step into the corruption abyss.

As has become a typical response from the Trump administration in all things Manafort, the White House issued a statement Friday night distancing the president from the Manafort cases.

A 10-page, late afternoon court filing by special counsel Robert Mueller was a listing of lies that he says Manafort told authorities after he had cut a plea bargain with prosecutors that required him to tell the truth.

Manafort told the special counsel "multiple discernible lies" during interviews, allegedly including lies about his contacts with a Russian national linked to Russian intelligence.

"The government's filing in Manafort's case says absolutely nothing about the President," White House spokesperson Sarah Sanders said in a statement. "It says even less about collusion and is devoted almost entirely to lobbying-related issues. Once again the media is trying to create a story where there isn't one."

While a portion of the filing is under seal, the public portions detail Manafort's lies about Konstantin Kilimnik, a Russian employee of Manafort's political consulting firm.

Kilimnik, a longtime Ukraine-based business associate of Manafort and Manafort's ex-business partner Rick Gates, was identified by the special counsel as a former Russian intelligence operative when he was indicted in June.

Manafort worked with Kilimnik as recently as last year, when Kilimnik helped him write a positive opinion article published in Ukraine to burnish Manafort's image. That article was a violation of a court-imposed gag order, for which the judge admonished Manafort.

The Friday filing also laid out Manafort's alleged lies about a $125,000 payment toward a debt. Manafort allegedly changed his story concerning a related investigation and claimed that he had no continuing contact with the Trump administration when he in fact did, prosecutors said.