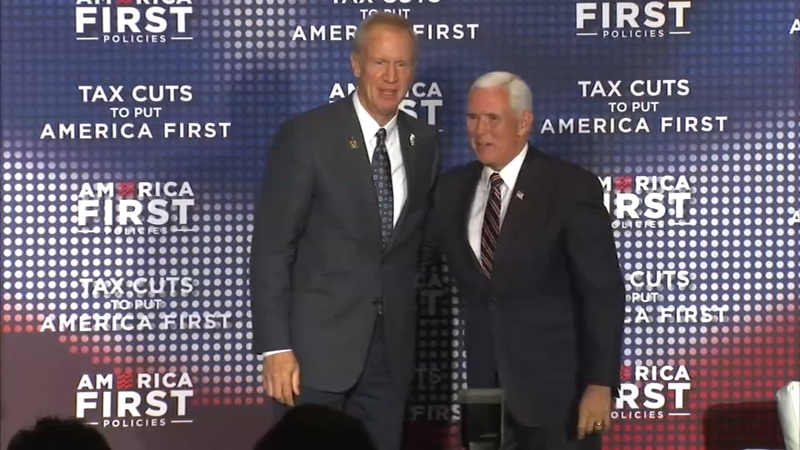 Vice President Mike Pence made an appearance in Rosemont Friday as part of a multi-state tour to promote President Donald Trump's Tax and Jobs Act.

Pence was the keynote speaker at an event at the Westin O'Hare Hotel, where he discussed how the Act will impact Chicago and Illinois and took part in a panel discussion.

The visit is the 17th stop in Pence's tour hosted by America First Policies, a non-profit organization founded by former Trump White House and campaign staffers.

"It is great to be back in the Land of Lincoln with men and women who helped elect a congress and a President who enacted historic tax cuts that are putting America first," Pence said at the event. "Thank you for being here."

Pence told the crowd that since the tax cuts went into effect, six million Americans have benefited besides the break in their taxes, including 55,000 Illinois workers who received a raise or bonus.

Governor Bruce Rauner, who has publicly kept his distance from Trump, introduced Pence at the event.

Rauner praised Pence as a great leader and an inspiration.

"Mike Pence along with President Trump are doing it for every American, right now," Rauner said. "We are transforming the American economy. Let's hear it for them."

Supporters were very excited to hear what Pence had to say.

"I am excited to see Mike Pence in person now because the tax cuts, I support that," said David Marentic, a student at Northwestern University. "I've been very conservative since I was a kid, really."

"It seems that Trump has forwarded his agenda in the last year that he has been in," said Trump supporter James Weaver. "He has kept most of his promises already, or at least tried to keep them, without the Democrats trying to avoid it and push it out. I don't hate the Dems, I don't love the Republicans, but I want what's best for America."

Protesters gathered outside, but some snuck inside and disrupted Pence's speech on several occasions. Those protesters were escorted out while the crowd chanted "USA" to drown them out.

"What's wrong with this place, I mean what's wrong with America to have these people protesting about the good things that are happening, are they stupid?" said Susan Lee of New York City.

"This is about sending the message that there's a very important choice coming up in November," said State Representative Christian Mitchell. "Bruce Rauner is revealing his true colors by being here today supporting President Pence, Vice President Pence and the Trump administration."

A group calling itself Refuse Fascism led a rally outside the hotel and brought signs detailing crimes they claim the Trump/Pence Administration has committed against immigrants, women, gays and Muslims.