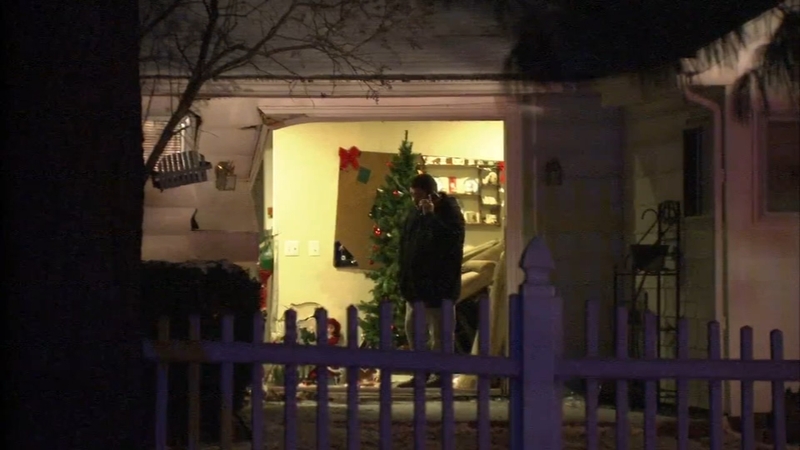 Car crashes into house in Levittown

LEVITTOWN, Pa. -- Bristol Township police say a driver who overdosed crashed his vehicle into a Levittown, Bucks County home, leaving a man injured and causing the death of a family pet.

Police said the driver of a red Honda Civic was unconscious when he left the road, hit a tree stump and went airborne, crashing into a fence and then through the back sliding glass doors of a home on the unit block of Gun Road.

A man inside the home was sitting near the doorway when one of the glass doors came flying on top of him, hitting him in the head.

The man's wife ran across the street to a neighbor for help, and that neighbor helped to get the door off of the man. Police said the man was rushed to a nearby hospital.

Vincent Gonzalez lives across the street from the couple's home. He said he rushed over to help around 6:10 p.m. Sunday.

"I just ran across the street and she was more concerned about her husband Mr. Jim," said Gonzalez. "He was bleeding from the head and the young man who was in the car was still in the car unconscious."

Police said the homeowner was hurt and there was a lot of blood.

"Apparently he was sitting in a La-Z-Boy chair right behind the door when the car came in," said Bristol Township Police Sgt. Tom Gaffney. "He had a head laceration and was bleeding pretty profusely."
Police said during the ensuing chaos, the family's yellow Labrador retriever got out of the house and was hit and killed by another car. According to police, the driver of that car left the scene.

"It's just adding insult to injury. They're hurt. They're property's hurt. They were doing nothing wrong. And on top of all that, they lose their pet. How much worse can it get for them?" said Gaffney.

Police said the driver who caused the initial accident was passed out and needed to be revived with Narcan. They said he was taken to Lower Bucks Hospital under the influence of narcotics.