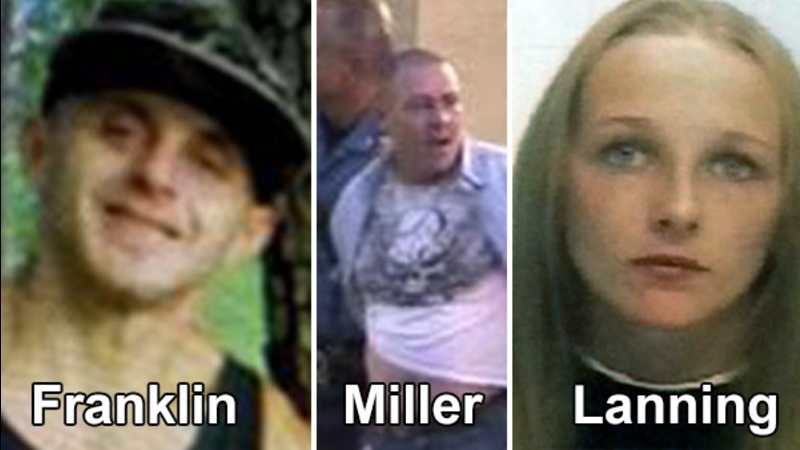 TREVOSE, Pa. -- Police seeking someone on a Pa. parole violation stumbled upon another man and a woman who were wanted for a double homicide in North Carolina at a hotel in Trevose, Pa. on Saturday afternoon.

Now the male murder suspect is dead, while the woman and the hitchhiker are in custody.

"They picked up the wrong hitchhiker," Bensalem Public Safety Director Fred Harran said. "Criminals picking up criminals ... bad luck for all of them."

The dead man was identified as 34-year-old Lloyd Wayne Franklin. He and one of the other suspects, 38-year-old Jennifer Lanning, had active arrest warrants out of Davidson County, North Carolina for homicide.

Lanning is in police custody. Police say it appears Franklin died of an apparent self-inflicted gunshot wound to the head.

The third person involved, James Miller, was the hitchhiker.


Police say officers were on patrol around 2:30 p.m. when they discovered Miller was staying at the hotel. They went to his room and Franklin, who apparently assumed police were looking for him in the homicides, opened fire.

Harran said the officers did not return fire because they knew there were other people inside.

The suspects barricaded themselves inside, police say, and the SWAT team was called.

After a tense standoff, Lanning finally surrendered. Then, unable to contact the men inside, officers deployed a robot to scope out the room.

Negotiators eventually convinced Miller to come out. Action News cameras were there as he crawled out to waiting police.

Franklin's body was later discovered inside.

"It appears the individual may have killed himself so as not to be taken into custody by police," Harran said.

Franklin and Lanning had been on the lam since Oct. 29, when police found the bodies of Davie Lee McSwain, 82, and his wife, Joan McSwain, 78, in their Thomasville, North Carolina home and their minivan missing.

Police seeking someone on a Pa. parole violation stumbled upon another man and a woman who were wanted for a double homicide in North Carolina.

Authorities believe Davie McSwain shot Franklin before he died. After he fled with a gun stolen from the home, police said, he picked up Lanning and the two stole prescription painkillers during pharmacy robberies in Aberdeen and Roanoke Rapids, North Carolina, and Georgetown, South Carolina, before apparently heading north.

Lanning was charged Sunday with Fugitive Of Justice and sent to Bucks County Prison in lieu of $1 million bail.

Miller was sent to BCP on his warrant for parole violation.

Bensalem and Bucks County Detectives say they are currently investigating and are cooperating with the North Carolina authorities.